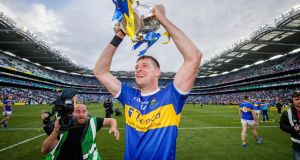 What a difference a Liam makes. A year after receiving a single nomination and no winners, All-Ireland champions Tipperary have 11 names on the shortlist of 45 players in line for a 2019 hurling All-Star award.

“It doesn’t matter about Liam Sheedy as long as Liam MacCarthy is going back to Tipperary,” said their winning manager in the immediate aftermath of the 14-point final win over Kilkenny last August. Yet there’s no denying the role Liam Sheedy played in it all, returning to the position nine years after delivering his previous All-Ireland to Tipperary in 2010.

Their 11 nominations are divided across every sector of the field, including team captain Séamus Callanan, who is also nominated for the 2019 Hurler of the Year award.

Beaten finalists Kilkenny are next best represented with nine players nominated for an All-Star award, which are jointly presented by the GAA/GPA in association with PwC.

Leinster champions Wexford have been honoured with eight nominations, while Laois are also duly rewarded for their Joe McDonagh Cup winning season with two nominations, both goalkeeper Enda Rowland and defender Jack Kelly making the 45-man cut after a campaign that also included a championship win over provincial rivals Dublin.

In all, eight counties make the cut, with two awards each for Cork, Dublin and Galway to round off the list.

Callanan scored 1-2 in the final win over Kilkenny to keep up his record of scoring a goal in every championship game during the summer, eight in total, finishing with 8-18 in all. The Drom-Inch player is also in line for his fourth All-Star to go with 2014, 2015, 2016.

Joining Callanan in the three-man shortlist for Hurler of the Year is Cork’s Patrick Horgan and TJ Reid of Kilkenny: Reid finished top scorer in 2019 with his 5-83, ahead of Horgan, with Forde third highest on his 2-6.

Noel McGrath joins his brother John and is in line for his third All-Star to go with 2009, 2010: the Loughmore-Castleiney midfielder was also named RTÉ man of the match after the final win over Kilkenny, scoring a point and a free in the process, seeing off team-mates Ronan Maher and Barry Heffernan to collect the TV accolade.

It is all change of the top however: in the 12-month period since the 2018 awards only six of last year’s winning players make this year’s nominations list. Those six are Eoin Murphy (KIlkenny), Seán Finn (Limerick), Graeme Mulcahy (Limerick), Patrick Horgan (Cork), Cian Lynch (Limerick) and Richie English (Limerick).

The All-Star selection of 15 players will be made late next month and all players will be honoured at a banquet in Dublin on Friday, November 1st. The football nominations will be announced on Friday morning.

“The standards set by the names on the lists helped drive the quality of the games we witnessed over the course of 2019,” said GAA president John Horan. “And I look forward to deliberations that will accompany the final selection of players in the weeks ahead before the awards are presented at the start of November.”

Paul Flynn, chief executive of the GPA, also acknowledged the shortlist of players. “They’ve all been exceptional on the pitch throughout the championship, and have given us all a memorable year of hurling. The work that these guys put in behind the scenes is phenomenal.”

Player Of the Year Nominees

Young Player of the Year Nominees