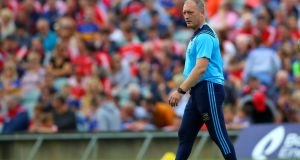 Liam Cahill: former Tipperary minor and under-20 manager could be set to take over as Waterford senior boss. Photograph: Tommy Dickson/Inpho

The Waterford County Board are set to appoint their first outside hurling manager in over a decade with Liam Cahill now emerging as their preferred candidate.

The Tipperary native won a senior All-Ireland with his county in 2001. Since then Cahill has guided the Tipperary minors to All-Ireland success in 2016, and also the last All-Ireland under-21 title in 2018, winning another in the form of the inaugural Under-20 All-Ireland this year.

Former county player and selector Peter Queally was originally understood to be the preferred choice but he’s now been informed otherwise and Cahill’s name is expected to go before the county board for ratification early next week.

It’s been over a month since the county began their search for a replacement for manager Páraic Fanning, who stepped down after just one season in charge, taking Waterford to a league final, but failing to win a single championship match in the Munster round-robin.

Queally previously managed the Passage club to a Waterford hurling title in 2013, and was part of Davy Fitzgerald’s backroom team as Waterford manager in 2008, the last time their appointed a manager from outside the county.

Another former manager Derek McGrath, in charge before Fanning took over, was also linked to a possible return but he’s since agreed to serve as hurling coach to the Laois minors for the 2020 campaign with Liam Dunne as manager.

Meanwhile Paddy Power have suspended betting on Wexford hurling manager Davy Fitzgerald heading west to take over the Galway position from Micheál Donoghue who stepped down on August 20th, despite originally agreeing a two-year extension. Galway have been on the hunt for a replacement ever since.

Fitzgerald was initially 100/1 to move to Galway, but after dropping to odds-on shot (1/2), betting was suspended. Fitzgerald has completed his third season as Wexford hurling manager, guiding them to a first Leinster title since 2004, beating Kilkenny, before narrowly losing out in the All-Ireland semi-finals to eventual winners Tipperary.

The former Clare and Waterford manager has yet to commit to a fourth season, however, despite Wexford’s desire for him to remain.

Meanwhile newly-crowned All-Ireland hurling champions Tipperary are expected to dominate the list of hurling nominees in contention for a PwC All-Star award in 2019, the long-list being announced later today.

Last year, John Kiely’s winning Limerick team were represented with all 15 players on the short-list of 45 names. Beaten All-Ireland finalists Galway received nine nominations, while last year Tipperary gained just one nomination, with forward Jason Forde. Also announced will be the short list for this year’s Hurler of the Year, Cian Lynch from Limerick getting the nod last year.

On Friday the football nominations will be announced, Dublin’s record fifth successive All-Ireland set to see them top the list; last year they had 12 nominations, with 2018 beaten All-Ireland finalists Tyrone receiving seven.

Dublin also got all three nominations for the 2018 Footballer of the Year in Ciarán Kilkenny, Jack McCaffrey and Brian Fenton (Dublin) for the senior prize, won by Fenton.

Wicklow have also confirmed former Kildare under-20 manager Davy Burke to take over from John Evans as their senior football manager. Burke has also managed Kildare club Sarsfields, and at age 31 becomes the youngest manager in the senior inter-county game