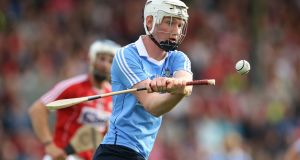 Dublin’s Shane Barrett: “Hopefully on Sunday now, we right the wrongs and come out with a win. And I’m very confident we can.” Photograph: Cathal Noonan/Inpho

Shane Barrett is being hit left and right and not for one second does he flinch. Dublin are missing some of their best hurlers. Confidence must be shattered after the league. They’re so young and lack leaders. And Galway are absolutely flying.

Maybe it’s because Barrett, one of Dublin’s steadiest defenders for three years now, is used to this sort of barrage. So he takes each question on the chin and stands up for Dublin’s chances in Sunday’s Leinster hurling quarter-final in Tullamore.

“They had a great league, no doubting that,” Barrett says of Galway. “And they’re going to come in with momentum and confidence. We have to be wary of that as well.

“But preparations are going very well for us. Yeah look, we haven’t performed to the way we expected. In training, we’ve trained very well and then on match days, sometimes the consistency isn’t there. As has been the case the last couple of years.

“Hopefully on Sunday now, we right the wrongs and come out with a win. And I’m very confident we can, yeah. Very confident. Preparation has gone well, training matches, friendlies, they’ve all gone well for us. You only take the confident things from these matches, and push on.”

Barrett is speaking in Dublin at the launch of the Bord Gáis Energy All-Ireland under-21 championship, and part of his confidence comes from the fact he’s already established far beyond that grade: he was brought into the senior panel three years ago when manager Ger Cunningham first took charge. He’s also co-captain of the under-21s this season and, win, lose or draw on Sunday, they are out next Wednesday against Kilkenny.

Still, the questioning of this Dublin team is justified. They lost the Division 1A relegation playoff to Clare, conceding 3-18 on the day, and, given the 3-21 that Galway put up in their league final over Tipperary, the Dublin defence must be nervous.

“We performed well in some games, but we didn’t get the result. We took a week to get over that [Clare defeat]. We said what had to be said, and pushed on from there.

“Literally, once the ball was thrown in for the second half, Clare turned us over and were straight through. That sort of set the tone for them. We couldn’t stop it. They kept coming and coming. And we weren’t able to hold out until eventually, they got on top. You cleared it out and it came straight back down. I feel our backs did well that day, for the amount of ball that came through.”

In the meantime came word neither Paul nor Mark Schutte, who both played key roles in Cuala winning a first hurling All-Ireland for a Dublin club, would be rejoining the Dublin panel. With players like 2013 All Star Danny Sutcliff still in self-imposed exile, isn’t experience now a little thin?

“It is big loss, to lose the calibre of Paul and Mark Schutte. They said even when they were with Cuala they couldn’t fully commit, which is fair enough. It’s a massive commitment for any player on a team like his.

“In Mark’s case, he committed to college at the start. And as you’re probably aware, he got a call then into the footballers. He’s got a good few calls over the last few years to join the footballers. And maybe his taste is changing and he wants to give football a go. That’s where he is now.

“But the likes of Donal Burke and all these younger lads now are playing just as well as anyone. And the likes of Eoghan O’Donnell, Chris Crummey, obviously Liam Rushe as well – he’s always going to be a big voice there. And then you have the young lads coming in. They have a voice as well and they’re starting to spread it around. So it’s not an issue, that we’re lacking leaders.”

So, to soften the blows a little: Dublin have good record against Galway in the Leinster championships, beating them in the 2011 semi-final, and 2013 final, although Galway easily handled them in last year’s quarter-final replay; and haven’t Cork just proved that favouritism in hurling doesn’t always follow form?

“Yeah, exactly. That was phenomenal game. That’s what we’re going to try and do to Galway. We’re not going to sit back. We’re going to go straight at them, like they did.

“Seeing a team beat the All-Ireland champions is massive. And the way Cork did it, they put on a show. We need to bring the intensity, bring the physicality and push on from there. And it is in the backs of everyone’s head that there is that sense of redemption.”