Uneventful Dublin press nights leave only one question: what more is there to say? 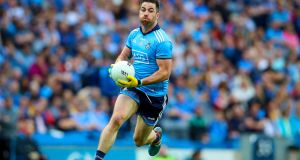 All-Ireland final media day, Dublin edition. Over the years, most of the Dubs have sat down and done their duty here, plenty of them more than once. For some of them, after all, this is their seventh final in nine seasons. Fair to say there aren’t a lot of stories left untold at this stage.

“God, it’s a while since I sat down talking shite to you lads,” says Michael Darragh Macauley, pulling up a chair. Normally, in these scenarios, Michael Darragh is about as bankable as they come. He’s an open-hearted soul, a bit of a messer at the back of it all, someone with an interesting life away from football.  If you turn up at a Dubs media gig and Mick Macauley is on the list, you’re happy with your lot.

But this year, for whatever reason, it was a bit of a trial. It’s probably our fault, in fairness to him. These press gatherings are always an unnatural construct at the best of times. One player in the middle, anything up to a dozen hacks horse-shoed around him, all trying to pull on different threads to see if one of them draws out into anything.

We’ve all been around Macauley for a decade at this stage and because he’s usually such good value, maybe we were all a bit too relaxed here, expecting the good stuff just to flow out of him. Maybe our questions weren’t good enough.

Or maybe he was just in a funny mood. One way or the other, this ended up being a bitty old spin on the merry-go-round for him and for us. It started off with a routine opener, what a good season he’s having, etc, etc...

“I think I have another level to be honest, which I need to hit at some stage because we don’t have many matches left,” Macauley said.

“But yeah, no, I feel good. I think a lot of this stuff comes down to getting a run with the injuries. A lot of people don’t see what happens behind the scenes, people have niggles, people wonder why people don’t play, it’s usually because they’ve been picking up niggles or haven’t had a good run of training schedules. So I haven’t had a scratch. Yeah, all good, feeling good.”

This was the Monday after the Saturday night mincing of Mayo, which he put down to “just everyone singing off the same hymn sheet there for a while and we had them under pressure and we kind of capitalised on it quite a bit”.

We brought up the fact that he was still a key component for Dublin all these years later when compadres from the 2011 win like Paul Flynn and Bernard Brogan weren’t and he asked were we trying to retire him as well.

That was sort of the run of it over the allotted 17 minutes and 20 seconds we had. We’d bring up a subject, Michael Darragh would rock and roll his head from side to side and throw out a gag, signalling us to keep it moving and try another. Understandably enough, he wasn’t up for talking in any depth about history or five-in-a-row or Dublin’s dominance or funding or any of that stuff.

“I’m actually not that well up on balance sheets and what’s going on, I really don’t have a clue. From a Dublin point of view, I know we’ve had our house in order for a while and lads are coming through from underage. It’s come together in a good storm at the moment. There’s a lot of pieces of the puzzle that have come together. But it won’t last forever. This Dublin team won’t last forever. Yeah, so we’ll just have to see what happens over the next while.

“I know it’s a cliché but look at my fellow soldiers, Paul Flynn and countless others now who have gone on and they’d love to be in this position. So it definitely won’t last forever. We’re in a nice spot now, just building up to another All-Ireland final. I didn’t think I’d be playing in my seventh All-Ireland final in the last decade so it’s a decent innings. I definitely have no complaints and I want no regrets over the next three weeks as well.”

When Michael Darragh Macauley is upbraiding himself for throwing out clichés, you know the All-Ireland final press day has eaten itself.

Not his fault at all – he was in good humour all through it, even shouting up to the Dublin media manager at one stage: “This is the worst interview I’ve ever done – you’ll be delighted with it.”