Tyrone focused on defence ahead of Croke Park trip

Colm Cavanagh says errors committed against Roscommon must be eradicated 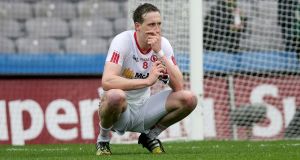 Tyrone will work on tightening their defence this week for they are unlikely to find Dublin as goal-shy as Roscommon were at the weekend.

The Connacht side hit the net as early as the second minute in Omagh, and broke through for three more efforts at goal in the first half alone.

Colm Cavanagh was relieved to see Mickey O’Neill spread himself to save from Ciaran Murtagh and Ultan Harney, and equally grateful to Tiernan McCann for his vital block on Sean Mullooly.

The midfielder insists basic errors must be eradicated if they want to get anything out of Saturday’s clash with the All-Ireland champions.

“A lot of passes went astray, a lot of simple things went wrong. We’ll have to work on them in training this week, to be fair, and I’m sure we’ll do a bit of video work that will hopefully highlight those issues.”

Bang to the head

Tyrone may have to face Dublin without All Star Mattie Donnelly, who took a heavy bang to the head early on at Healy Park.

“It would be a massive loss. Obviously Mattie has been one of our best players for the last number of years. To lose him against Dublin would be a big blow for us.

“But we have a good squad, and if Mattie isn’t playing whoever comes in will be able to do a job for us. It gives an opportunity potentially for someone else to come in and stake a claim.”

Donnelly’s switch to centre back has meant a change in midfield partner for Cavanagh, who lined out alongside Padraig McNulty during the Dr McKenna Cup, but had league debutant Declan McClure by his side on Sunday.

“Declan was fantastic, he battled well, he caught ball, he made good forward runs, a real fit lad making a great start for himself, and hopefully that will continue.”

Tyrone have frequently found themselves battling relegation in recent seasons, and at the end of the 2015 campaign they did indeed go down.

After a season spent in Division Two, they’re now happily back in the top tier, aiming to stay there without the need to scramble for points in the latter stages of the campaign, and Sunday’s six-point win over Roscommon got them off to a positive start.

“We got two points, and we’ll be looking for two points next week, and gradually build that up. We get our points on the board, consolidate our position in Division One and see how it goes.

“It was important for us to get the two points. That was our aim, and if you lose the first game, you’re always looking over your shoulder for the rest of the campaign. So job done, but obviously more to come.”

Cavanagh wants to make Healy Park a fortress once again, and that means reversing a recent poor record at the Omagh venue.

Sunday’s 0-18 to 1-9 victory over the Connacht men represented a decent start, but tough league tests lie ahead at home to Cavan, Monaghan and Mayo.

“It’s important. When you’re at home, you always expect a victory and you always want a victory, and we did that, so I’m hoping we can continue that going forward.”

Cavanagh added: “Roscommon started very fast and they could have got a few goals which could have put us on the back foot. Lucky enough we had a few good men who made a few good blocks, and we were able to get a few scores and get ahead of them.

“The lads worked very, very hard. It’s a high-intensity game these days and the lads are fit enough to do it, so it’s going to be very important to keep that up against Dublin, and going forward in the league.”

1 Gerry Thornley: Wild reactions to this Ireland team as fickle as the wind
2 Battleoverdoyen only ‘50-50’ to take chance at Cheltenham
3 IRFU not consulted prior to Minister Harris’ recommendation to cancel Ireland v Italy
4 Cheltenham keeping a watching brief on coronavirus
5 Dan Tuohy explains ‘rotten to the core’ comments
Real news has value SUBSCRIBE

Pep Guardiola believes Man City deserve some luck in Europe 22:30
Barcelona nab away goal after going behind in Naples 22:19
Bayern Munich teach youthful Chelsea a European lesson 22:08
Battleoverdoyen only ‘50-50’ to take chance at Cheltenham 22:00
IRFU not consulted prior to Minister Harris’ recommendation to cancel Ireland v Italy 21:42
Crossword Get access to over 6,000 interactive crosswords