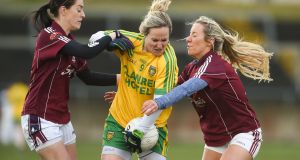 Ephie Fitzgerald’s All-Ireland winners lost 0-9 to 0-12 on their travels to Clonmore, as star forward Mackin scored five points for the hosts.

This was an historic victory for Armagh in the senior grade and they were full value for it, as Cork suffered their first competitive loss since losing to Dublin almost a year ago in the league.

Sinead Finnegan and Fionnuala McKenna scored a brace of points each for Armagh, with Caroline O’Hanlon, Lauren McConville and Eve Lavery also getting on the scoresheet.

In Clones, Monaghan won an incredible game against Mayo, as Caoimhe Mohan’s goal four minutes into stoppage time sealed a 3-9 to 1-14 victory for the home side.

Monaghan created some decent goal chances in the first half and finally took one when Ciara McAnespie netted two minutes after the restart.

Six minutes from time, they were level but with Staunton prominent, Mayo outscored Monaghan by 0-3 to 0-1 from there to lead by two as the clock ticked down.

There was still time for one last Monaghan attack, however, and Mohan struck to secure a precious win.

In Castleisland, visitors Dublin came away with a 1-8 to 0-8 victory over Kerry to maintain their 100 per cent start to the league campaign.

Kate McKenna’s goal effectively separated the sides but captain Sinéad Aherne bagged six points, including five frees, for her side.

Dublin netted from their first attack, McKenna on target, and Dublin were 1-3 to 0-2 to clear with 12 minutes on the watch.

At half-time, the visitors were 1-5 to 0-4 in front but Kerry opened the second half impressively and had the deficit back to just a single point, 0-7 to 1-5, by the 38th minute.

Despite losing Lauren Magee to a yellow card, Dublin dug in as a couple of crucial Aherne frees left Dublin four points clear with time running out.

Ní Mhuircheartaigh kept Kerry in touch with a late score but Dublin held out for maximum points.

At Tuam Stadium, Donegal made it two wins from two as star forward Geraldine McLaughlin stepped up to the plate with two late scores to earn a 2-10 to 1-12 victory over Galway.

Galway were ahead for the first time in the game in stoppage time but after McLaughlin claimed the equaliser, she popped up with a dramatic winner.

McLaughlin, the outstanding player on view, netted one of Donegal’s first-half goals, Paula McCrory on target with the other, as the visitors led by 2-6 to 1-5 at half-time.

Ailbhe Davoren goaled for Galway and the hosts were much improved in the second half, moving ahead with time running out.

But McLaughlin snatched victory from the jaws of defeat for Donegal, who are thriving thus far after gaining promotion back to the top flight.

In Division 2, there were victories for Cavan, Tyrone, Waterford and Sligo, while Tipperary, Leitrim, Wexford and Meath were victorious in their Division 3 fixtures.

And in Division 4, Wicklow, Antrim, Fermanagh and Longford claimed maximum points from their second outings of the season.