Business as usual as Dublin get campaign off to winning start 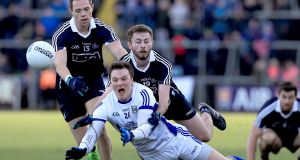 A memorable afternoon came with all the trappings: Cavan back in Division One of the Allianz Football League and All-Ireland champions Dublin back on the field, complete with an unusual change of strip for both teams with Cavan in white and the visitors in navy blue.

That was the extent of the unfamiliar, though, as Dublin efficiently picked up the points on offer to stretch their unbeaten run in league and championship a step closer to two years, an anniversary that comes around on 1st March.

The win was built on familiar virtues: Dean Rock’s free taking was excellent until his radar went a little haywire – together with a few others – towards the end. Michael Darragh Macauley looked very sharp at centrefield while James McCarthy was probably the most influential player on the pitch, between his movement up and down the field, his aerial prowess and two points thrown in for good measure.

Cavan’s new manager Mattie McGleenan was effusive in his praise for the champions and league holders and enthusiastic about what it would mean for his team to be playing at the top level this season.

“From my point of view, absolutely brilliant – there were 16,000 people there today. I thought it was a great game of football, serious effort from Cavan on our behalf. I felt we made fundamental errors; we missed some good scoring chances at key moments in the game.

“I thought we conceded some cheap kick-passes away at times. But listen, Dublin teach you and Dublin punish you. Their movement off the ball, their running, their scoring, absolutely class – that’s why they are All-Ireland champions, they are the benchmark and that’s what we are aiming for.”

Kingspan Breffni Park hosted its biggest crowd, 16,331, since the international rules test of 2013, causing a traffic pile-up that delayed the throw-in by 15 minutes.

Cavan were resilient and competitive for much of the first half. Seán Johnston’s perpetual motion dragged the Dublin defence all around the full forward line and although the champions shadowed and tackled reasonably well they allowed space to open up for the home side to keep track on the scoreboard.

Gerard Smith and Niall Clerkin helped take the fight to their opponents and Niall McDermott kicked a couple of frees but there was always a sense that they’d struggle to stay neck-and-neck throughout the 70 minutes.

McGleenan was happy to be able to fast-track the return of Gearóid McKiernan – scorer of 1-27 in last year’s promotion campaign – to the team and he got half an hour in the second half.

“I wanted to get 20-25 minutes into him. He’s trained with ball in hand for the last three or four training sessions, so the way we looked at it was he was mad keen to get on; he wants to play against Dublin.”

Unsurprisingly for a team the bulk of whom hadn’t played together since the All-Ireland final Dublin lacked precision at times although their pace and passing picked up as the match wore on and a run of five unanswered points between the 21st and 30th minutes set them up for victory and the lead never dropped below the half-time margin of three points, 0-10 to 0-7.

Dublin manager Jim Gavin, who had left the O’Byrne Cup to a caretaker consortium headed by Paul Clarke, was pleased with both the return to action and the outcome.

“Good to see them – it was a workmanlike performance. Eighteen points we got out there today; we limited them to four points from play in the second half, which was pleasing defensively when we expected them to come hard at us.

I thought we controlled the game very well. All told – good to get off again.”

Most of the All-Ireland winning team returned to action but there was recognition of the understudies’ success. Nine of the panel had played in the previous week’s O’Byrne Cup final and two of them – Niall Scully and Jason Whelan – got the nod to start.

Scully maintained the trajectory of his outstanding January performances and looked well able for the promotion and kicked two points and a terrific block in the second half. There was also a return for 2015’s Player of the Year Jack McCaffrey, who hadn’t played for Dublin in nearly year after travelling to Africa and missing most of the inter-county season. He looked in good fettle.

“He knows the scene well so it’s good to have him back on board,” said Gavin, who also confirmed that former dual player Tomás Brady had opted out of the panel for “work and personal reasons” and that he would be missed.

1 Valtteri Bottas takes Austrian Grand Prix as Lewis Hamilton is demoted to fourth
2 Donnacha O’Brien takes first Classic as Fancy Blue wins French Oaks
3 Monica Seles: The warrior queen who could have been the best ever
4 Ferrari’s Charles Leclerc ‘will not take the knee’ before Austria GP
5 Matt Williams: Six Nations must recognise the desire for revolution outside Europe
Real news has value SUBSCRIBE