Cork attacker comes off bench to bring Rebels back into the game, but misses late free 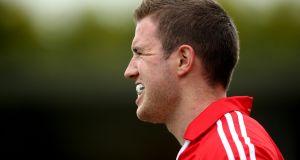 Promotion favourites Cork and Galway shared the spoils at Pearse Stadium on Sunday when they were level six times during the second half of this Division Two contest.

Former All-Star Colm O’Neill had a chance to win it for the Rebels in the dying moments but his free from 40 metres was pulled to the right and went wide.

But it was O’Neill who was the driving force for Cork when he was introduced nine minutes after the restart and he kicked four points from play in addition to a free.

Both teams played better against the wind and while Cork didn’t score until the 17th minute they led by 1-3 to 0-5 at the break. They would have been further ahead into the breeze but they shot nine wides in that opening half, adding another six after the break. Galway had two wides in each half.

Galway didn’t use the wind well, despite getting a good start with league debutant Barry McHugh kicking two early frees, but they hit back before the interval when McHugh kicked his third free and Declan Kyne also scored.

Galway started well into the breeze with two frees from McHugh and efforts from Danny Cummins and Paul Conroy pushing them 0-9 to 1-3 in front, but the introduction of O’Neill was decisive for Cork.

Niall Coakley, O’Neill and John O’Rourke found the range to tie the match at 1-6 to 0-9 after 51 minutes.

The sides then exchanged points three times, with O’Neill to the fore for Cork, while the introduction of Michael Day, son of former Galway star Val, added penetration to the home attack.

McHugh, Cummins and captain Gary O’Donnell found the target for Galway with O’Neill responding each time with the equalising score.

That meant the sides were deadlocked going into the closing minutes and Cork looked set for victory when O’Neill and Ruairi Deane edged them in front.

However, Galway did not panic and substitutes Cillian McDaid and Cathal Sweeney levelled before O’Neill sent his late free wide.

Cork finished with 14 when Brian O’Driscoll picked up a second yellow card after a tangle with Galway substitute Peter Cooke.

1 Cam Newton broke the mould: Can his flame be rekindled at the Patriots?
2 Pete Sampras: The forgotten great with the best serve in the business
3 The unsolved mystery of Goran Ivanisevic’s stunning Wimbledon win
4 The Game Changers: Vincent O’Brien, a pioneer who took Irish racing to the world
5 Tipping Point: DeChambeau’s transformation raises questions, but who will ask them?
Real news has value SUBSCRIBE