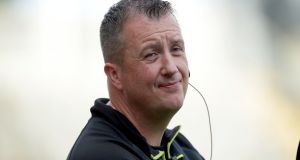 Adrian Marren netted a controversial penalty with virtually the last kick of the game as Sligo came from six points down to draw with Armagh at Markievicz Park on Sunday.

Kieran McGeeney’s side led by 2-10 to 0-10 with 10 minutes remaining and, despite four points in a row from the home side men, Ethan Rafferty looked to have finally settled it for Armagh when he put them back into a three-point advantage with time almost up.

But Sligo substitute Brian Egan floated a ball into the Armagh area in the fifth minute of injury-time, and referee Patrick Neilan adjudged that Stephen Coen had been fouled and awarded the spot-kick.

Marren had the composure to fire the ball to the net and earn his side an unlikely point.

Armagh claimed well-worked goals in each half – Ethan Rafferty netting the first on 22 minutes and Mark Shields the second with 20 minutes left.

Points from Rafferty (2) and Ciarán Higgins got Armagh off the mark, but Sligo responded and went ahead for the only time in the game when Mark Breheny, Keelan Cawley, Niall Murphy and Marren all pointed in quick succession.

Stefan Campbell was causing the home side all sorts of problems, and hit two points before linking up with substitute Jamie Clarke to set up the second goal, finished by Shields.

Marren and Adrian McIntyre responded at the other end but Campbell and Rafferty pointed again before Sligo introduced attackers Kyle Cawley, Coen and Egan off the bench.

All three were effective – with a superb score from Coen the standout contribution – before the late penalty decision gave Marren the opportunity to level it.

Tipperary improved immeasurably after half-time to claim an opening-day Allianz League victory for the first time since 2014.

The Premier County, playing in front of 722 spectators at Semple Stadium, transformed a four-point first-half deficit into an encouraging five-point victory.

Trailing by two at the break, 0-5 to 0-7, Tipp went with a more direct approach in the second half and it worked a treat.

Both Tipp goals came from long balls pumped in by midfielder Alan Moloney, with Conor Sweeney providing both assists.

Michael Quinlivan, a 2016 All Star, profited in the 56th minute, before Philip Austin netted six minutes from time.

It was encouraging stuff from Tipperary, who were two points down (0-9 to 0-11) before turning the screw.

With the breeze at their backs in the second half, and kicking towards the Town End, Tipp showed fine game-management to seal victory.

Both teams finished the game with 14 players as Tipperary had used all six substitutes when they lost a second player, Willie Connors, to a black card.

And Antrim were a man light for the closing seconds when Conor Murray was dismissed for a second bookable offence.

A black card for Ryan Murray at the end of the first half cost the visiting Ulster side.

Murray had been motoring well before he was handed his marching orders. It was a hotly disputed decision but arguably it was a correct one as the forward appeared guilty of a hand-trip.

Murray’s replacement, CJ McGourty, did well but also missed a couple of straightforward opportunities from frees.

Antrim were also unlucky to see two efforts in the first half come back off the upright, while Tipp goalkeeper Evan Comerford did well to keep out a palmed Stephen Beatty effort.

Comerford’s opposite number, Chris Kerr, saved well from Quinlivan early in the second half but he would have to pick the ball out of his net twice as Tipperary broke through.

From the off, it was Antrim who opened the brighter and landed the game’s opening scores, Ryan Murray with a superb sideline before Matthew Fitzpatrick fired over when a goal was there for the taking.

Tipp hit back to level through Liam McGrath (free) and leading scorer Austin, but Antrim had the better of the exchanges in the middle third and grew in confidence.

With wing-back Paddy McBride impressive, Antrim were 0-7 to 0-3 clear by the 29th minute and Tipp were showing signs of rustiness, following their 2016 championship heroics.

The hosts were well beaten in their McGrath Cup fixtures against a Kerry under-21 selection and Cork, but after points from Brian Fox and Kevin Fahey kept them in touch at half-time, whatever manager Liam Kearns said at the break had the desired effect.

Move the ball fast, long and often appeared to be the mantra as Tipperary delivered on the manager’s instructions to eventually break Antrim’s resistance.

Sweeney, an All Star nominee last season, was proving a handful inside and with Moloney booming in those aerial deliveries, Quinlivan and Austin showed predatory instincts to claim the crucial goals.

Longford made a winning start to league campaign and in doing so exacted revenge on Offaly for last year’s league and championship defeats. In a disappointing afternoon for Pat Flanagan’s men they ended the game with 13 players after Joey O’Connor (straight red) and Eoin Carroll (second yellow) were sent off.

In a tight first half both teams were guilty of some wayward shooting. Longford‘s Sean McCormack and Liam Connerton both had goal efforts saved by Offaly ‘keeper Ken Garry. Robbie Smyth was the main man for Longford kicking over five points (two frees) in the opening half as his side went in at the break 0-7 to 0-6 in front.

Having lost Paul McGee just before the break to a black card Longford lost Sean McCormack to the same colour in the 44th minute. It mattered little because with Smyth on fire Longford still had a quality go-to man.

Smyth (free), Paddy Collum (‘45) and Barry McKeon (free) all pointed to put Longford ahead by five in the 65th minute. Offaly then had O‘Connor dismissed and it got worse for the Faithful County one minute later when substitute Larry Moran scored the game’s only goal to stretch Longford’s lead further.

Offaly hit over three consolation frees before they lost Carroll to a second yellow as Longford secured two points in the opening day of the league.