Conal Keaney points to collective spirit as source of success 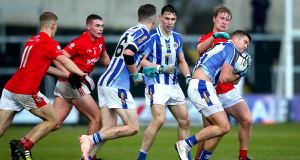 Ballyboden St Enda’s have made things hard for themselves in their two Leinster finals. In 2015 they were nearly dragged into extra-time by Portlaoise and on Sunday, they had to come with three late points to seal victory over a game Éire Óg on an afternoon of December cold, ferocious wind and bucketing rain,

Conal Keaney, the former Dublin dual player now 37, got an unaccustomed start in this year’s final and played a key role with two points in a match that saw the teams level at 0-3 each going in at half-time.

His manager Anthony Rainbow expanded on the difficulties caused by the pitch.

“I think a lot of people in the stands or looking at it from home as well didn’t think conditions were as bad as they were but it was horrendous out there.

“You are looking at gale-force winds of 30-40kph. A pitch that probably there was a lot of rain on over the last four or five days and didn’t hold it too well. Conditions were poor but in fairness to Laois County Board they probably got the pitch in as best condition as they could.”

Keaney spoke about the disappointment felt by the team that after winning the All-Ireland four seasons ago, they slipped out of contention. “We probably felt we didn’t get enough out of it and then with one thing and another, with injuries and different managers, it just didn’t work.

“When Rainbow became involved, his character really shone through on the team, just galvanises the whole squad and everyone wants to keep battling for everyone. I know every team says that but this team is all about the collective, not about any individual.”

Keaney acknowledges that as primarily a hurler, he only “drops in” on the footballers but is full of admiration for their commitment. He appeared to be taken unawares by the moving forward of the All-Ireland semi-finals to early January.

“Didn’t know that – training over Christmas. It is what it is. Enjoy tonight, next few days – look forward to it. We’re here to win an All-Ireland, not a Leinster title. We want to get back to Croke Park again.”