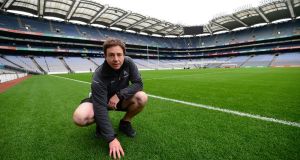 With no activity for a full fortnight, a rare break for a living, breathing and heavily used surface, he and his team overseeded the pitch and covered it with germination sheets.

What they found when the sheets were removed before Dublin’s intended Allianz Football League game there against Meath on March 15th, was that a strong seed strike had delivered new and widespread growth.

That game, and a double header of All-Ireland under-20 football semi-finals on St Patrick’s Day, never took place, of course, and with the country in lockdown and GAA activity parked for the foreseeable future, it could be many months before Croke Park is required again.

“So we had all this lovely new seed come through and we’ve not had matches since,” said Wilson, who also manages the GAA’s National Games Development Centre at Abbotstown.

“The pitch has just got better and better, week by week and to be honest with you I’ve never seen the Croke Park pitch look as good in April.”

If it all feels a little like being teased, like flicking through Twitter and salivating at images of empty and immaculate parks and golf courses beneath blue skies, consider how badly Croke Park actually needed the rest. And every other GAA pitch in Ireland for that matter after a wretched winter of incessant rain.

“It definitely needed a break,” nodded Wilson, who previously worked at Arsenal’s Emirates Stadium and noted how that venue might host between 30 and 40 games a year compared to Croke Park’s 90.

“The National League is a challenging time for us. You’re working in a massive stadium which has its own micro-climate and we face huge issues with shading in the stadium.

“One thing that’s completely forgotten about, and this is almost like going to back to school on this, but the way grass grows is through photosynthesis, it needs light energy. That’s one thing we do not get in Croke Park, from literally October through the end of February, there’s hardly any light in the stadium.

“It’s a big challenge, I would find that the hardest part of the year without a doubt at Croke Park, trying to keep a good surface through that period and especially with the winter we’ve just had which was very, very wet. That naturally makes the pitch soft and it’s then vulnerable to more damage. So yes, the pitch was ready for rest, even if we didn’t expect to get it.

There had been a loose plan to replace the Croke Park pitch later this year but that too is unlikely to happen now.

“We were looking to do that but obviously now work like that is going to be totally put on hold,” said Wilson, noting that the pitch could obviously be required if Championship schedules are redrawn.

What Wilson is keen to stress in these unprecedented times is that an opportunity is there for all GAA pitches to return in far better shape, whenever activity resumes.

For now, with only essential maintenance permitted, he is simply advising that pitches are mowed, generally two or three times a week, to the regular height of ‘anything between 30mm and 50mm’.

A little off the top and often is Wilson’s advice, improving density and thickness.

“If you’re cutting it consistently, just nipping it, just taking the top off, you will see an improvement in the quality of the pitch without a doubt,” ensured Wilson.

When restrictions ease, Wilson suggests renovation plans for club and county grounds that might include, overseeding with 100 per cent rye grass, an application of top-dressing, fertilising – with a control release fertiliser – aeration works like tining, slitting or linear aeration ‘to open up the soil and let it breathe and let the roots go down’ and weed control.

Bruce tells Newcastle players from now on ‘we will do it my way’ 19:09
VAT fears eased as Willie Mullins’ Grangee enters UK without charge 19:13
Packers have the quality to overcome resolute Rams 19:00
Bryson DeChambeau says he must relax his brain to succeed 18:00
Ireland’s ODI with UAE postponed for a third time 17:31
Crossword Get access to over 6,000 interactive crosswords