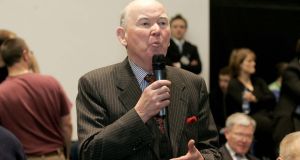 Noel Walsh, one the GAA’s most influential figures, has died from pneumonia caused by Covid-19. Photograph: Inpho

Everything Noel Walsh, who died on Wednesday in Ennis Hospital due to pneumonia caused by Covid-19, did was “for the good of Clare football,” according to one of the historic team of 1992, who took the Munster football title back to the county for the first time in 75 years.

Noel Roche, a veteran by then and at one time holder of the record for Ireland international rules appearances was one of many in Clare – and farther afield – mourning the passing of one of the GAA’s most influential reformers.

Colonel Noel Walsh, a career army officer, was initially involved in his county’s football tradition. A county medallist with his club St Joseph’s Miltown-Malbay, he went on to play for and manage Clare.

It was as an administrator that he struck the first blow in facilitating the 1992 success by campaigning tirelessly at Munster Council for the introduction in 1990 of an open draw in the provincial football championship and the end of Kerry and Cork being seeded every year to reach the final.

He would serve as chair of the Munster Council from 1995-98 by which stage the Clare hurlers had come to prominence with two All-Ireland victories.

As a national administrator, Walsh was well known at congress where his reforming energy was turned to tirelessly campaigning for the opening of GAA grounds to other sports, an ambition that came to pass in 2005 with the decisions to allow rugby and soccer be played in Croke Park and last year to authorise Central Council to make the decision in relation to other venues.

He was a staunch supporter of the Railway Cups but not even his formidable advocacy could halt the decline of the interprovincial competitions.

He also chaired the influential Football Development Committee whose work paved the way for the introduction of the All-Ireland qualifiers in 2000.

Innovative thoughts “He served his county at provincial and national level with much success,” said Clare county chair Joe Cooney. “Noel’s innovative thoughts allied to a strong determination that the sport and equality for all was always to the fore led him to be one of the most respected administrators in the Association.”

Munster chair Liam Lenihan paid this tribute: “He was a very genuine supporter and one of the people who made the GAA what it is, a community-based worldwide organisation that gives people a sense of pride in their own place. His example is being followed today by those helping vulnerable people in their own communities.”

Walsh will be remembered for his radiant enthusiasm for the GAA and his courteous good humour. He twice sought the presidency of the association but lost out to Seán McCague and Seán Kelly in 1999 and 2002 – not before making one of the most memorable concession speeches in the former year.

He went on to be elected a trustee of the GAA in 2000. In retirement in recent years he was pleased to support his club St Joseph’s in its return to prominence in Clare, which saw them winning the last two county football titles.

United slip up in top four race; reasons to be cheerful for Munster 07:00
Solskjær says Man United did not deserve to beat Southampton 06:36
Gerry Thornley: Munster will make for interesting case study when rugby resumes 06:30
James McClean says he gets no support for abuse he receives 06:34
Tiger Woods returns as Rory McIlroy battles to hold world number one spot 06:00