Malachy O’Rourke’s side through to third straight Ulster decider 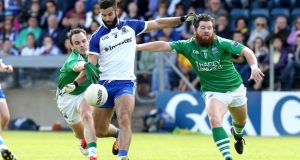 Monaghan’s Neil McAdam tries to get his shot away despite the attentions of Paul McCusker and Ciaran Flaherty of Fermanagh during the Ulster SFC semi-final at Breffni Park. Photo: Andrew Paton/Inpho/Presseye

History doesn’t always have to be made with Wagner doing the soundtrack. It is 91 years since Monaghan were in three consecutive Ulster finals so there was no denying that the afternoon came with a certain amount of epochal significance attached. But in truth this Ulster semi-final was drained of drama well before the end.

That said, Monaghan found it heavy enough going against a Fermanagh side that really didn’t deserve the black mark of a 10-point beating beside their name. Pete McGrath’s team are better and were better than the scoreline paints them but they folded in the final quarter after Ryan McCluskey was red carded for dropping his knee on a prone Owen Duffy.

For Fermanagh’s most experienced player, it was a fairly brainless act from McCluskey. He had been having an excellent game up to that point as well, patrolling the D and cutting off the supply to increasingly frustrated Monaghan inside forwards. But once he walked, Fermanagh folded. Monaghan outscored them 1-6 to 0-2 over the remaining 13 minutes.

Maximise “Ten points flatters Monaghan quite a bit and they will admit that as well,” said McGrath afterwards.

“Over 70 minutes, their power and their strength and their experience, that ability particularly in the second-half to maximise their chances, was better than ours. They’re a long way further down the road in their development than we are.”

Monaghan’s status as a possible dark horse for later in the summer owes more to their ability to hang tough with their betters than to be ruthless in dealing with their underlings. They’re not the best flat-track bullies in the land. As against Cavan in the opening round, they found Fermanagh sticky and obdurate here.

They struggled to get Conor McManus into the game. Their All Star forward was double- and tripled-marked and had to constantly drop deep into midfield to see any sort of possession. In there, he was just another body lost in the jungle. For Fermanagh, that represented a job well done.

Owen Lennon was playing his first championship game since the 2013 All-Ireland quarter-final and looked in need of the run. Dessie Mone and Karl O’Connell found it hard to get on the front foot, in the first half especially.

Only for the Hughes brothers Kieran and Darren, they would have sorely missed the sort of pep in their step that has made them such a formidable proposition under Malachy O’Rourke.

As often happens in a game between two well-coached blanket defences, the opening half was slow and tetchy and often dull. Sweeper swept, spoilers spoiled, moves broke down. Any scores that came were hard-earned. Fermanagh midfielder Ryan Jones followed up his brilliant kicking display against Antrim with another two bombs.

Kieran Hughes outfought and outfoxed three markers to clip a great point on 18 minutes. Darren Hughes cantered through the Fermanagh defence to pop one of his own close to half-time. These were the highlights of the sort of half that wouldn’t unduly detain The Sunday Game editors.

Monaghan ended it 0-7 to 0-5 ahead. Had the scoreline been reversed, few would have argued. Fermanagh were every bit the match for Monaghan up to that point and had they carried any sort of goal threat, there could have been a future in the game for them.

Even when Monaghan turned up the temperature in the third quarter, Fermanagh took the heat and gave back some of their own. Owen Duffy brought fizz off the bench for Monaghan, while further points from Kieran Hughes, Mone and O’Connell gave a glimpse of what they’re capable of. But Fermanagh hung tight and a couple of stellar points from wing-back Declan McCusker meant they only trailed 0-14 to 0-11 in the 57th minute.

But when first McCusker saw the line and then McManus took advantage of a botched kick-out to score his goal soon after, Fermanagh’s day was done.

Monaghan filled their boots over the closing 10 minutes and now await either Donegal or Derry.

Dominate “In a lot of championship matches you don’t expect to dominate and have everything your own way,” said

“But it was a matter of more or less keep it in their heads and realising that’s how championship matches go.

“We felt as the game went on we could wear them down more, but in fairness that happened with the Ryan McCluskey sending off gave us a big boost as well.”

1 Andy Farrell recalls 13 players to Ireland squad ahead of England clash
2 Eddie Jones continues to revel in putting rugby’s nose out of joint
3 Tipping Point: Eddie Jones’s rhetoric is out of place in a febrile political climate
4 Rory McIlroy heads for Mexico with ‘WGC slam’ in sight
5 Harry Gregg: a reluctant hero and a revered shot stopper
Real news has value SUBSCRIBE

Ireland’s most capped player hangs up his hockey stick 18:54
Gritty Kim Clijsters’ comeback ended by Garbine Muguruza in Dubai 18:53
Rory McIlroy heads for Mexico with ‘WGC slam’ in sight 16:58
Tiger Roll on track for Aintree after solid run in Navan 16:17
Andy Farrell recalls 13 players to Ireland squad ahead of England clash 15:11
Crossword Get access to over 6,000 interactive crosswords