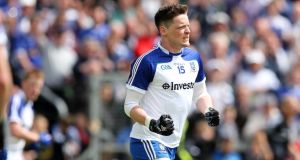 It took an injection of years rather than legs off the bench to see them home but Monaghan managed to wriggle out of Breffni Park all the same. For the second time in a row against Cavan, they had a solitary point to spare at the long whistle. Also for the second time in a row, Cavan walked off the pitch with regrets at having left it behind them.

When the need was greatest and the temperature was reddest, Monaghan’s hold on their faculties proved just that touch more secure than Cavan’s. They found vital scores in the closing 20 minutes from Conor McManus and Colin Walshe, All Stars both; from Dessie Mone, a serial All Star nominee; from Dick Clerkin, the longest-serving county footballer in the land.

Cavan, by contrast, spilled two wides in the endgame from the boot of Ray Galligan, playing his first ever game in goals for the county. The wind was swirling and neither the free nor 45 he came up to take were simple – but the same applied when the Monaghan players were shooting. They landed theirs, he missed his. The scoreline takes no pity.

“We’re delighted with how the boys reacted,” said Malachy O’Rourke. “We always knew it would be tough coming here. I suppose in the first half playing against the wind was tricky enough and we wouldn’t have been happy with some aspects of our performance. But we knew we were very much in the game and that we wanted to improve in the second half.

“Cavan started the second half very well and at four points down midway through the half, it wasn’t a great position for us. But I think we showed our experience and character to find our way back into it.”

Like the Chinese view of the French Revolution, it’s too early to judge what a game like this says about Monaghan. Coming from four points down with 20 minutes to go might have been a sign of their character; only scoring two points from play in the first 50 minutes might have laid bare the limits that will curtail them against better sides than Cavan. We’ll all be experts in hindsight.

For now, they can only content themselves at having come through a stern test of their credentials. They thought their way out of the bind they’d got themselves into, running down fewer and fewer blind alleys as the game wore on. It proved to be enough in the end but not by any great distance.

Cavan will play worse than this and win plenty of games. They’re a bit of a patchwork side still – they pressed long-time under-21 midfielder Michael Argue into service at full-forward and though he gave Drew Wylie as awkward a day as he’s seen in a while, he wasn’t the most fluent 14 you’ve ever seen.

Gearóid McKiernan was typically effective when they got him into the game and Ronan Flanagan was canny and dangerous when he pushed on into the forwards. And as long as they keep their blanket intact, they will keep most oppositions within range.

Indeed, they did better than that for long spells here. They kicked into a 0-4 to 0-1 lead after 15 minutes. Argue had Wylie in trouble and fisted a point, Cian Mackey and Niall McDermott kicked regulation frees. Monaghan could only get McManus into the game intermittently – although his 17th minute point, a whirling, rollicking fandango of a score from out on the right-hand side, was a glorious advertisement for the threat they pose when they can connect with him.

Cavan had the better of it as the half wore on though. McKiernan lolloped forward for a classy score – three right-boot solos to fool his man into thinking he was one-footed, buying the space to boom a left-footed kick through the posts. Mackey and Flanagan notched a point apiece. Come half-time, Cavan were 0-9 to 0-7 ahead.

And though Monaghan had the breeze after the turnaround, it took them a good quarter of an hour to find any use for it. Cavan played smart football upon the restart with slick link play a feature. Substitute Ciaran Brady put them 0-12 to 0-9 ahead in the 44th minute with a score that went through a dozen pairs of hands from the Cavan kick-out without Monaghan being able to lay a finger on any of them.

Argue increased the lead to four on 50 minutes and Monaghan were indisputably in trouble. But when they needed digging out of it, familiar names grabbed the shovel. Darren Hughes – excellent throughout – scorched through for a goal chance that went just over. Clerkin came off the bench to land a sweet point, Mone sallied up from corner-back to score a sweeter one. All of them were seen and raised by McManus’s scarcely believable final effort.

Cavan had their chances to keep it level but missed them when it mattered. But they got closer than many gave them credit for in the build-up and Terry Hyland has plenty to work with come the qualifiers.

“There is loads of ability in our team. It is only a matter of getting the boys outside the group to believe in them. Sometimes they knocked a little back because people pigeon hole them. The lads fought for everything today. If it had ended up a draw, I don’t think there would have been a row from anybody.”