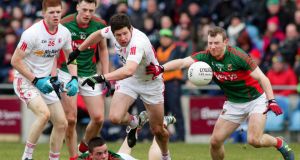 Sean Cavanagh battles for the ball with Mayo’s Colm Boyle on a day Tyrone ran out winners at MacHale Park. Photograph: Mike Shaughnessy/Inpho

“Sometimes it is very black and white from certain perspectives,” said Mickey Harte minutes after watching his team strike what may prove to be a significant blow for the new order. “And I have to allow people to be as ignorant of the facts as they want to be.”

That note of defiance and understated rebuke closed an afternoon when Tyrone redeployed the tactical organisation and street-fighting qualities that characterised their brightest years.

The manner as much of the fact of last week’s loss to Monaghan triggered a mood of minor crisis around the Red Hand county so this visit to the west felt like more than an ordinary league game. The unwritten question on the match programme was: have Tyrone still got it? Nobody questions the county’s facility to produce stylish, attacking talent but the visiting crowd scanned the field for evidence of toughness and hunger.

It meant that there was more riding on this February afternoon for the visitors than for Mayo.

MacHale Park has become one of the best spring football venues in the country: always well attended – 9,956 showed up yesterday – and the pitch always in good condition. Yesterday, with a dense morning fog lifting over the bacon factory end, they entertained the crowd by playing Andy Irvine’s always-stilling version of As I Roved Out even as the Tyrone men went through a full-metal-jacket warm up. It easily qualified as one of the many great GAA moments that nobody ever sees or hears about .

When the ball was thrown in, nobody roved out. Harte went back to basics, setting up a hard-working, packed defensive unit across the 45, choking the attempted attacks by Mayo’s hard-running ball carriers like Donal Vaughan and Aidan O’Shea and forcing rushed, low percentage shots.

So many of the Tyrone names were new but the approach here was familiar. The white shirts counter-attacked at pace, resulting in really fine scores by Cathal McShane and Darren McCurry to establish a lead they held throughout the first half and would not relinquish.

A Mayo goal from nothing in the 50th minute – when Kevin McLoughlin’s ambitious shot was toe-poked to the net by Cillian O’Connor – ought to have been ruled out for a free to the visitors but even that suckerpunch didn’t soften their resolve. Neither team could land a score for the next seven minutes but then Tyrone struck with sweet venom, Seán Cavanagh’s brilliant long pass curling around the Mayo last line. PJ Lavery collected and played Peter Harte through to finish at his leisure. Mayo were reduced to pot shots after that and finished with 15 wides.

“That is something we have to learn from,” said Pat Holmes, Mayo’s joint manager. “We snatched at shots. We were expecting them to be defensive . . . maybe not as much as they were. But you are faced with different tactics and eventualities in games. It was up to us to break them down and we couldn’t do that.”

Still, even in that cohesive first half, there were signs that Tyrone were still prone to the yips. Mayo sharpshooter Mickey Conroy somehow ghosted into the 21 to pluck a high ball unchallenged and it took a smart retreat to the goal line by Cathal McCarron to prevent the first goal of the afternoon. In the 17th minute, goalkeeper Niall Morgan ambled up field with the ball only to have his punt downfield blocked by the same Conroy. Morgan bolted back to his post and was relieved when Mayo’s swift attack resulted only in a point for Mark Ronaldson.

But these lapses were rare. McCarron was outstanding, diligent in his duties and also excellent at sweeping up broken balls and setting Tyrone in motion. Tyrone were 0-8 to 0-4 up at the break and would yield just three points after their tea and biscuits. Cancel that Mayo goal and it made for a very impressive day out for the Ulster men, with Mattie Donnelly confirming his credentials as the leading moral force for his team and Justin McMahon in solid form when drafted in at fullback on short notice.

Harte’s decision to cut loose so many of the gods of the last decade created a bit of an outcry in the county and has led to criticism from some of his former players. He smiled when asked about it.

“The people who won things in ’03 and ’05 and ’08 didn’t start out as winners. You have to become winners and other people have to be given the chance to do that. Some may do and some may not but that has been the case across the years.

“You have to give people the chance to mature and deliver the best of themselves. And sometimes people give their best and it doesn’t return the trophies they would like. And life is like that as well.”

It was a forgettable day for Mayo, and Holmes’ sanguine attitude suggests that the Connacht champions will do just that.

No, this was about Mickey Harte’s ambition to paint yet another masterpiece. He cautioned everybody that this was just one game – and in February at that. But the glint in his eye was back.