Mick O’Dowd believes there is more to come from Meath

For the second game in a row, Meath put up 18 scores 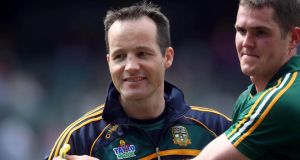 Mick O’Dowd has got Meath into a Leinster final in his first season in charge.

There was a time when being a Meath manager who took his side to a Leinster final would hardly have counted as a big deal. Now? Well, it won’t exactly blow the hat off your head – especially given the rhythm and rhyme of their opponents in a fortnight’s time – but it’s not nothing.

Especially not as Mick O’Dowd has done it in his first season. Add it to promotion from Division Three and their graph is unquestionably pointing upwards. Whatever happens from here, 2013 will feel like the start of something.

Bit of nervousness
“It’s good to get a win,” said O’Dowd. “In the second half we kicked on but we had to because Wexford had been on top in the first half. It took us a while actually. There was a bit of nervousness in some of our players or something. In the first half we knew we definitely weren’t in the place we needed to be to win the game. I think we stepped it up all over the pitch in the second half. The lads dug in.”

For the second game in a row, Meath put up 18 scores. That’s a gaudy enough total, testament to the powerful running of Graham Reilly and the nerveless free-taking of Mickey Newman. Repeat it against Dublin and the final might not be the cakewalk we all envisage.

“I suppose going from 1-17 and still kicking 18 points is good going. At times they had a couple of men back, their wing forwards, and we kept at it. But I’d say there’s more improvement to come. Or there will certainly need to be more improvement. No more than the wides Wexford kicked, I thought we rushed a lot of shots in the second half and didn’t show enough patience and composure at times so that’s something we’ll focus on.”

Wasted chances
For Aidan O’Brien, the day held only regrets. He was frustrated with his forwards and the chances they wasted in the opening half. Wexford had so much possession but they couldn’t make it count. They went home wondering how they’d made a mess of it. “I was a little disappointed at half-time because I thought we were in a scoring position a lot and towards the end we lost our way. We missed a few opportunities we could have done with. Meath got a few scores so the gap was narrow. We would like to have more of a lead and based on the possession we had we might have been entitled to more of a lead.

“In the first half we took bad options. And then in the second half, we dropped balls into the keeper. Paddy O’Rourke saw a lot of the game there because we took wild shots. In a few instances, we gave poor quality ball to front men. You can’t do that. It’s the chances we dropped short and squandered that hurt us. It gives an opportunity for them to counter.”