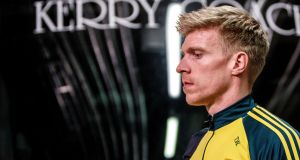 Kerry’s Tommy Walsh: “I was probably putting pressure on myself, and trying to do things at a hundred miles an hour, and things just weren’t coming off.”Photograph: James Crombie/Inpho

In September 2006, Kerry and Roscommon played out a gripping All-Ireland minor football final which ended in a 0-15 to 0-15 draw. The Kerry team was auspicious because it contained a dynastic element: the midfield pairing of David Moran and Tommy Walsh were sons of two key members of the iconic Kerry team. “Tommy Walsh was a colossus at midfield,” was the verdict in The Irish Times on the following Monday. “Soon the Kerry seniors will have a Donaghy clone.”

It was a prophetic assessment, and has never been more relevant than this weekend ahead of next Sunday’s definitive game in the Dublin-Kerry rivalry.

Rarely has any Kingdom football team approached an All-Ireland final as such outsiders. It’s a position that will please them.

All through the championship observers have scanned for evidence that there are realistic contenders to Dublin. Kerry’s appeal was based primarily on their dynamic win over Mayo in Killarney, and the minor classic shoot-out with Donegal in Croke Park in which they put up a total of 1-20.

Yet at half time in the All-Ireland semi-final against Tyrone, in which they struck just 0-5, all of that counted for nothing. They looked suddenly young and lost and mired in Ulster quicksand. Peter Keane knew he needed to change things up.

Walsh had been more or less invisible all summer: he had been given 20 minutes against Meath in the final Super-8s group. But that game was off-Broadway. This was different.

Few players have had such an interesting career trajectory as the Tralee man. He played 15 championship games for Kerry from 2007 to 2009, finishing with 4-23 as a midfielder used as a forward. His athleticism was strikingly superior to most of his peers at that stage, and there was no real surprise when, along with Moran, he was offered trials by St Kilda, an Australian Rules club.

Moran was home that December in time to line out against Kilmurry-Ibrickane in the Munster club championship. Walsh, though, was gone.

His departure hurt Kerry, but the feeling was that they could absorb his absence. They were All-Ireland champions for the fifth time in the decade, and were favourites to defend their crown. It was a period when their fabled rivalry against the Dubs was little more than a fond conceit: the city team hadn’t beaten Kerry since 1977, and had been left bewildered by their latest encounter that August, a game which finished 1-24 to 1-7. With Tyrone beginning to age, Kerry’s horizon looked cloudless.

Anyone searching for the why behind Dublin’s radical reinvention has identified that 2009 game as a turning point. That was their low: the point to which they would not return again.

Kerry have landed just a single All-Ireland in the 10 years since Walsh last started a championship game for them. That 2014 campaign was remarkable and under-valued as Éamonn Fitzmaurice, the rookie manager, and his makeshift team of kids and veterans learned and adapted on the hoof. It was a surprise All-Ireland, one the cognoscenti had not bargained on. Apart from that the decade has been an exercise in frustration.

Keane knew the lie of the land when he took his role on. His decision to call Walsh in for training in January was low key and understated. He then gave Walsh a full league game early in the season against Galway in Tuam: significant opposition on a low-key day. It was a brutally tough match on a heavy afternoon.

Anyone who watched the veteran that afternoon could see the potential he still had to offer: a wrecking ball in the air, physically imposing, smart in his positional sense and distribution and, best of all, a proper grown-up on a team of youngsters.

Because Walsh harked back to a different era it was easy to forget that he was just 30 years old himself. Speaking afterwards Walsh could not contain his delight. His first attempt at a comeback, under Fitzmaurice in 2015, had been aborted. He was 26 and just back in the county, his professional career behind him.

“I think when I came back at the start I was very anxious to get back with Kerry and they were very anxious for me to come in,” he told Colm Parkinson years later. “Looking back I probably would have done things a bit differently, and I’d say the management would as well. I just didn’t get the run after that.

“I was probably putting pressure on myself, and trying to do things at a hundred miles an hour, and things just weren’t coming off. There were phases when I felt I was playing well enough to get a go and I just wasn’t.”

The pressure had begun to tell on his personal relationships and his private life, and he could sense that his presence was becoming a downer in the dressing room. In April 2016, after failing to win much game-time in the league, he decided to leave.

It wasn’t acrimonious and there was no outburst. He just stepped away. So Keane’s phone call was on the back of a revitalised club campaign with Kerins which included Walsh’s eye-catching 2-2 from play against Dr Crokes, the 2017 All-Ireland club champions.

The recall must have felt like a last chance. “I was surprised to get the call, but maybe the next time they will be calling me is to collect the footballs,” he said that day in Tuam.

Would Keane be willing to go for broke and unleash Walsh from the start?

The main reason Walsh didn’t become the Donaghy clone in the second part of his Kerry career is that they squad had someone else to fill that role: Kieran Donaghy himself.

When you look at Donaghy’s football life he single-handedly changed Kerry’s fortunes in two distinct periods, bursting into life in the 2006 championship when Jack O’Connor decided to try him at full-forward, a switch that gave Kerry the turbo-boost to change from an uncertain qualifier team into All-Ireland champions.

In 2014, Donaghy had been sitting on the Kerry bench almost as an afterthought when Fitzmaurice fired him in as a last-gasp substitute in the All-Ireland semi-final against Mayo. He literally changed the championship: earning Kerry 1-1 in a draw, haunting Mayo in the replay, and shocking Donegal with two goals in that year’s final. So Kerry had their totemic big man when Walsh returned. They could find no role for him.

It was significant that the most enthusiastic response to Walsh’s spectacular return to the big time against Tyrone was from Donaghy, who was working with Sky television. The pair are friends, but the urgency in Donaghy’s voice was genuine.

Walsh’s presence had given Kerry’s inside line a substantive and authoritative look, he had kept Ronan McNamee busy, he threw his weight around in a confrontation with Niall Morgan, but most of all he looked at home: winning possession and distributing it and coming deep to make himself available for two restarts when Kerry needed an outlet.

“He has got to start the final for Kerry,” Donaghy declared. “You got to go with your size, with your big guys. He’s an experienced player and a leader in the dressing room.”

Would Keane be willing to go for broke and unleash Walsh from the start?

Certainly he is now a key part of Kerry’s plans. Either scenario gives Jim Gavin and the Dublin fullback line a new worry to consider.

It’s true that they dealt with the Donaghy threat in 2015, but the composition of their defence has changed since then. What Walsh gives Kerry is the one thing Dublin can’t plan against: the element of the unknown.

Tommy Walsh’s role in this All-Ireland is one of the many fascinations. He won’t have to worry about collecting the footballs for a while.