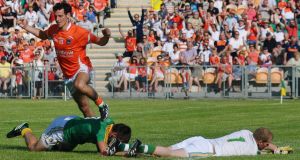 Armagh manager Paul Grimley has urged Orchard County fans not to get too carried away with their eight-goal trouncing of Leitrim saying they are still a work in progress.

Armagh brought their qualifier tally to 10-34 after they backed up their facile victory over Wicklow with another rout at Páirc Seán MacDiarmada, but Grimley said he will be sticking to his preordained blueprint, despite their heavy triumphs.

“There is still a three- or four-year plan. That hasn’t changed, two wins doesn’t change that.

Top table
“We are still about two years away from the top table. That’s my feeling. When the time comes around there will be somebody around to take the team onto the next stage.

“I knew at half-time against Cavan that the tactics needed tinkering but the learning curve was when you were training for something you see it through and you don’t be looking for a way out.

“But I have put my hands up and said I refused to change the tactics and people can criticise me for doing that but that was my call and for as long as I am here I will always do what I think is the right thing for the team,” said Grimley, who previously served as assistant to Kieran McGeeney in Kildare.

Leitrim’s inability to silence Armagh’s impressive forward line proved their downfall and only for a couple of bright saves from Cathal McCrann, they could have conceded ten.

But as it was, three goals from Eugene McVerry, two from Jamie Clarke and one each from Tony Kernan, Kevin Dyas and Mark Shields saw Paul Grimley’s men run out easy winners.

For ten minutes before the first goal arrived Leitrim looked like they might be able to match Armagh, but after trailing by 4-8 to 0-4 at half-time their hopes ended.

And their joint manager George Dugdale said he is unsure if himself and Barney Breen will remain on for another campaign. “Our two-year term is up so it is not in our hands at this stage. I hadn’t reflected on anything other the match, so I have to go home and think about it but it is not in our hands, it is up to the county board.”