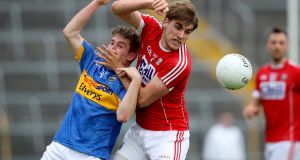 Luke Connolly kicked 10 points on his return to the intercounty scene as Cork swept past Tipperary and into the Munster football final where Clare or Kerry await in three weeks’ time.

With just seven days between their win over Waterford in the last round and today’s clash at Semple Stadium, Tipperary did well to hang on the coattails of Cork early on, but after Connolly cut loose and Colm O’Neill goaled five minutes from the break Cork’s win was never in doubt.

There were also strong impacts from Paul Kerrigan off the bench and Mark Collins in the half-forward line, but the Rebels were by far the superior team and Liam Kearns’s side will be dismayed to fall short of a provincial final.

Points from Connolly and Seán White got Cork off to a great start in Thurles, and despite Michael Quinlivan kicking Tipp’s first point after 11 minutes, the powerful full forward was crucially denied by a great save from Mark White a minute later.

Jack Kennedy’s free did allow Tipperary to level matters, but Connolly landed his side’s next three points, before he sent O’Neill in for the crucial goal and Cork led 1-8 to 0-4 at the interval.

The home crowd might have hoped that half-time would bring about a turn in fortunes, but instead Cork continued to dominate. Connolly added two frees while Collins landed his second of the game, but finally Liam McGrath brought the deficit back to nine points when he scored 19 minutes from time.

Subs Philip Austin and Liam Boland also got on the scoresheet for Tipperary to cut the gap to five points with 10 minutes to go, but Connolly and Paul Kerrigan stepped up with settling scores to put a halt to the Tipperary recovery.

And there was still time for the brilliant Connolly to bring his tally to 10 points – he landed five from play and then five in a row from placed balls – while Collins and Kerrigan bulked up their tallies in the closing stages to send Cork into the final, where they’ll look to claim a 38th provincial crown.

1 Ryan Baird scores a hat-trick as blue wave rolls over Glasgow
2 Larry McCarthy to become first overseas president of the GAA
3 Business as usual for Ireland as October date looks likely for Italy game
4 On healing and wild hurling: The re-education of Diarmuid Lyng
5 Joanne O’Riordan: Mo Farah should have to face Jeremy Kyle
Real news has value SUBSCRIBE