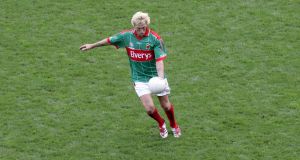 Ciaran McDonald, one of Mayo’s most celebrated footballers, has joined the county’s backroom team for 2020. McDonald, who played for Mayo for 14 years from 1994 to 2008, was welcomed to the coaching set-up by manger James Horan, who said he would bring a wealth of experience to the development of players and their skills.

“Eleven years on from his last senior appearance for Mayo, Ciaran is still being acknowledged nationally as one of the finest exponents of the modern era’’ said Horan. ‘’He is also a player’s player – someone who made his own opportunities on the field of play, creating some outstanding moments and demonstrating great flair, fitness, endurance and individual talent. I know he will bring all that innate ability and commitment to this present squad.’’

The squad officially recommenced its training for the 2020 season on December 1st . Mayo’s first game of the 2020 Allianz National Football League new season is against Donegal in Ballybofey on Saturday January 25th.

France expected to receive elite athlete’s exemption to travel to Dublin 14:10
Once pain of defeat eases Frampton will be glad it is all over 14:03
Leinster submit detailed plans to Government for safe return of spectators 13:15
‘I shredded everyone’s nerves, I’ll try to win more emphatically next time’ 11:08
Nick McCarthy to re-join Leinster from Munster 10:38
Crossword Get access to over 6,000 interactive crosswords