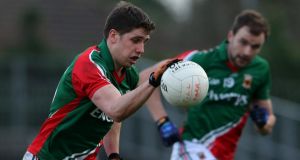 Lee Keegan: “The injuries are clearing now so there are a lot of places up for grabs and we are looking forward to a big month of March.”

The Westport man has acquired the reputation of being one of the feistiest markers in the game but regularly features on the scoresheet for Mayo.

On Sunday against Kerry, he made his mark after 28 minutes, the last man in a swift attack involving Keith Higgins and Michael Conroy and then worrying the Kerry goalkeeper with a low shot which flew over the crossbar.

“It’s good to have that winning feeling again,” Keegan says after the victory over Kerry. The Kingdom’s visit to Castlebar was an unlikely bottom-of-the-table clash and afterwards, the relief among the Mayo players was plain.

“We had a tough month or so there and a win makes a big difference going into next three rounds of the National League. There is a good buzz in the camp and injuries are clearing up. So we will look forward now to the challenge of Westmeath but we do feel as if we are progressing anyhow.”

Perceptions shift weekly in the league. Mayo could easily have won their opening game, a thrilling shoot-out in Newbridge. They were competitive in their visit to Omagh to play Tyrone so, although the results went against them, Keegan feels that James Horan was relatively happy with what he saw.

Very good
“I suppose with people there was a wee bit of panic around here and why would we panic? We put up 1-15 and 1-18 against two very good teams . . . the injuries are clearing now so there are a lot of places up for grabs and we are looking forward to a big month of March and hopefully getting some more points on the board.”

The big difference on Sunday was in the reserves that Mayo were able to send in during the last quarter, with Séamus O’Shea getting a huge ovation when he entered the game.

“Yeah, you saw the immediate impact they had. They steadied it up for us . . . Seamie gave some great ball in. And you saw the difference Enda Varley made . . . I think he won pretty much ever ball that was kicked in.”

It appears Mayo have shaken off the disappointment of consecutive All-Ireland final defeats and are approaching the season ahead with the same enthusiasm and diligence which has marked their approach under Horan. They appetite for work is again evident.

Horan has sent out experienced teams but Adam Gallagher and Brendan Harrison are among the next generation staking a claim while Shane McHale has had a steadying influence at number six.

Another step
“It is great to see guys coming through the minors and U -21s. Adam Gallagher and Diarmuid O’Connor and Brendan Harrison . . . if those guys weren’t coming through we wouldn’t have as much pressure. So it is keeping us on our toes and it keeps things fresh as well. . . . Next week it is another step and we will see where it brings us.”

Westmeath, hunting for any kind of result in Division One, will have to make sure that their defence is well patched up before Mayo visit. They have maintained the habit they developed last summer of hurting teams with goals. It took them just 30 seconds to open Kerry up on Sunday. Cillian O’Connor is all but match-ready and his return will deepen Mayo’s potential for goals.

When they gathered for the new season, Horan had a long injury list. One by one the regulars have returned for duty and now just Alan Dillon and Chris Barrett continue to visit the treatment table. So Mayo’s firepower is considerable again.

“We are creating about seven or eight goal chances every game,” Horan says.

“We know we are creating those chances so it is about taking them when they come along. Alan Freeman got a great goal starting off and that was a key factor for us.”

Amber Barrett hoping hard work will pay off with Ireland 06:44
West Ham ‘really disappointed’ after win over Leeds, says Moyes 06:28
Jamison Gibson-Park embracing life as the main man 06:53
Games remain on hold as the GAA wait for word from the Government 06:49
Jack Byrne embracing ‘technical football’ in Cypriot sunshine 07:16
Crossword Get access to over 6,000 interactive crosswords