Star forward helps Ulster side bounce back from Tyrone capitulation 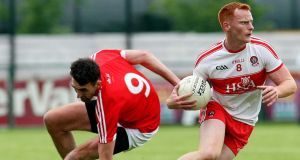 Derry bounced back from the nadir of their Ulster championship capitulation at the hands of Tyrone defeating Louth by five points in their opening qualifier fixture.

James Kielt top-scored for the home side, hitting 1-9 as Derry battled back from a point down at half-time, with Kielt’s second-half penalty confirming Derry’s safe passage to the next round.

A monster point from the outside of Kielt’s left foot was the last kick of the first half but the score still left Derry a point down, trailing 1-5 to 0-7 at the break. In truth the opening 35 minutes was a ragged, disjointed affair with both sides struggling for any real fluency and confidence after recent defeats.

Level at 0-2 apiece at 12 minutes, Louth drew first blood when Jim McEneaney drilled home a penalty to hand the ‘Wee County’ the early initiative. Derry responded, and three points in a row from Mark Lynch, Emmett McGuckin and Christopher Bradley brought them level at 0-5 to 1-2 after 23 minutes.

A Declan Byrne point edged Louth ahead soon after, and with free-takers Kielt and James Califf converting a brace of points apiece, it handed the visitors the slimmest of leads at the break.

Colin Kelly’s side stretched that lead shortly after the restart, but after that Derry gradually took a grip of events.

Kielt was at the heart of seven consecutive scores midway through the second half as Derry produced some of their best football of the season. A goal and a point from Declan Byrne gave Louth some hope, but after that Derry accelerated for home. Kilrea man Kielt despatched a 65th-minute penalty which wrapped up the Derry win, with a straight red for Byrne in injury time confounding Louth’s misery.