Instinct and experience stands to Mayo in win over Armagh 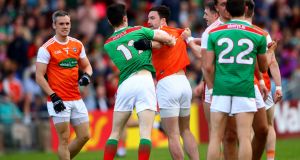 Now or nowhere, and this time instinct and experience stood to Mayo on their home ground, coming first on the bounce and then surviving the rebound to extend their championship summer for another week at least. Just about.

Cue the wild celebrations associated with this part of the west. In the fading shafts of sunlight and cloud, at times playing up to all their old hyper-drama, Mayo, the modern Prometheus of Gaelic football, backed by their unwavering support, survived the late and then one final onslaught from Armagh.

The last shot at goal was Armagh searching for extra-time, only Niall Grimley’s effort drifted just wide. Ambitious perhaps, but they wouldn’t have been undeserving of it.

At that stage it felt like Mayo had given their all, and it was just about enough to see them through, replacement Kevin McLoughlin’s goal on 53 minutes giving them just enough breathing space to survive, Cillian O’Connor also coming off the bench for the first time this year appearing to close out the deal with two late frees.

Only Armagh never once surrendered, hitting the last two points in the crazy ending, a free from Rian O’Neill and a point by Stefan Campbell. It was a super effort but died of thirst just short of the well.

McLoughlin’s goal was decisive: he finished with 1-1, and Donie Vaughan also made his old presence felt coming off the bench.

Before a bumper crowd of 18,711, Mayo needed all that instinct and experience in the white heat of battle and the heat of the moment: they finished out the first half without two of their most seasoned campaigners, Andy Moran (replaced), and Lee Keegan (injured), O’Connor’s introduction in the 48th minute giving them some of the composure they needed in front of goal. They’d little else to go on in the end

Mayo had been sent crashing at this same juncture last summer, caught in the crossfire hurricane of Newbridge or nowhere, and only here they couldn’t quite shake Armagh until the very death.

They’d never lost a qualifier game at Castlebar before this evening, and in truth that home advantage probably got them over the line. Anywhere else and they might well have crumbled.

Armagh matched them for pace and physicality, in a game low in slack and high in calories. They came to town still fresh from knocking out Monaghan, last year’s beaten All-Ireland semi-finalists, in round two, and Kieran McGeeney, in his fifth season as Armagh manager, rising in confidence.

It was a tense, nervous first half, cloudy and drizzling and shafts of sunlight overhead.

Mayo, opting to play with the breeze for the first half, scored from their first attack, ending with Conor Loftus converting his first free, only Armagh soon had them playing catch up.

Rory Grugan sliced the posts on their first attack, then on six minutes, Aidan Nugent slipped the ball clean through to Rian O’Neill, the man who came to Castlebar with 2-19 to his name already, from four games: the rising Crossmaglen star flicked into the net and Armagh were up 1-1 to 0-1.

Two minutes after that Mayo continued the swing and roundabout half with their first goal, Andy Moran setting up the loose and lively Fionn McDonagh. All square again.

It essentially stayed that way until the break, an O’Neill free and another Grugan point briefly edging Armagh back in front, only for Mayo to level it again on 22 minutes, another fine point from McDonagh, then a first from Darren Coen.

Still it seemed neither team could settle into a pattern. Mayo hit three poor wides in succession, allowing Armagh to steal a point in front again, before Mayo closed out with the last two points - a belter from Jason Doherty, and super point from captain Patrick Durcan, leaving them 1-6 to 1-5 to the good.

By then manager James Horan had seen enough of Andy Moran, swapping in Kevin McLoughlin on 32 minutes, and two minutes after that Keegan limped off after rolling his right ankle, off the ball.

With that players from both teams brushed off each other as they went for the isotonic drinks and team talk - the season and in some cases careers to play for.

Brendan Harrison and Lee Keegan both took turns on O’Neill in the first half, the rising Crossmaglen star not too bothered by either; Jarlath Óg Burns stood up against Aidan O’Shea and matched him every step of the way. And Jamie Clarke led the second half fightback with 0-5.

McGeeney said after the match he was disappointed with the amount of time added on for injuries. But in the end then Mayo found their way into the fourth round next weekend, one win away from the Super-8s, Armagh close out of summer. They may not be the force of 2017 again, but they’re still in the mix and that’s good enough for now.

It’s going to be a hot night in the old Castlebar town tonight.

Ulster look to secure quarter-final place with win against Bath 06:00
Leo Cullen: Benetton will play hard to beat in Treviso 06:00
Un De Sceaux bids to become rare 12-year-old Grade One winner 06:00
GAA hopeful club finals crowd will not be hit by date change 06:00
Connacht determined to make Montpellier clash count for something 06:00
Crossword Get access to over 6,000 interactive crosswords