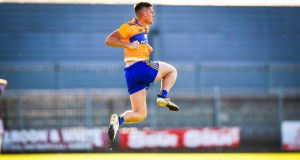 Brave Clare smashed through what had become an All-Ireland Round 3 qualifier glass ceiling with a huge display in Mullingar to move within touching distance of the Super 8s.

Knocked out in Round 3 in three previous seasons under Colm Collins, including in 2017 and 2018, the Munster men held their nerve at TEG Cusack Park to record a memorable penultimate-round win.

David Tubridy’s 1-2 haul, and 47th-minute goal in particular, proved decisive in a tight game that went right to the wire in front of around 5,000 at the sun-kissed venue.

Tubridy’s goal put four points between the teams, a big gap considering they’d been level seven times up to then and they ultimately relied on that cushion as Westmeath rallied late on.

Jack Cooney’s side, who sought their third win in a row over Munster opposition this summer, got the margin down to a point late on but just as a leveller seemed likely, Clare’s Gary Brennan produced two huge catches that averted the danger.

Clare will return to action next weekend in Round 4 of the qualifiers but it’s the end of the road for Westmeath who will count themselves hugely unfortunate on the evening.

They lost key duo John Heslin and Ger Egan within minutes of the throw-in with Heslin picking up a black card and Egan suffering an injury.

To make matters worse, a third forward, Ronan O’Toole, was black carded in the 21st minute.

Clare supporters who made the trip to the midlands could scarcely believe their good fortune and roared their approval as the team raced 0-4 to 0-1 clear.

Westmeath, in the circumstances, might have folded but fought back to level it at 0-4 apiece before edging a point ahead in the 20th minute.

It was an impressive show of character from a depleted side forced to think on their feet with four different first-half free-takers; Egan, Tommy McDaniel, Callum McCormack and Kieran Martin.

Captain Martin rose to the occasion with three first-half points – and 0-6 in total – though Clare oozed quality when attacking themselves, weaving some sumptuous passing moves.

The 2016 All-Ireland quarter-finalists were level with Westmeath on six different occasions in the first half with Jamie Malone, Cathal O’Connor and the excellent Brennan pinching terrific scores.

The sides were tied at 0-8 apiece at the interval in a tense and enjoyable tussle that looked set to go right to the wire.

They were tied again at 0-9 to 0-9 when Eoin Cleary kicked a free for Clare and, from the resulting kick-out, got a touch to the ball to direct it to Gavin Cooney who played in Tubridy for the crucial goal.

Suddenly, Clare led 1-10 to 0-9 and it was a cushion they would rely upon as Westmeath threw the kitchen sink at them late on.

Martin was excellent in this period late on for the hosts and scored back-to-back points before subs Tom Molloy and Noel Mulligan converted but they could never get back to level terms as Clare held on.