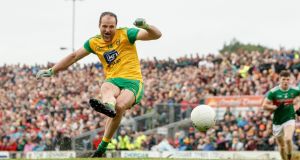 Donegal’s Michael Murphy hasn’t played in an All-Ireland semi-final or final since 2014 and he wants to change that this year. Photo: James Crombie/Inpho

Seasons change. It’s been seven summers and winters since Michael Murphy lifted the Sam Maguire for the first and, so far, the only time in his life. He was 23-years-old that September. Last August, he turned 30, an age of reckoning for anyone and the twilight decade for athletes.

This will be his 14th season playing with Donegal. They know he cannot keep playing forever. Somehow, nine years have slipped by since the intense wildfire started by Jim McGuinness lifted Donegal out of the recession and into the dream-time, in mood if not in fact. But McGuinness has been gone from the Donegal dressing room for five years now, longer than ever he spent in it as senior manager and Murphy is now the figurehead of a greatly changed team.

1 At least eight shot dead in German town of Hanau
2 A Russian cruiser with ‘cannibal rats’: What other ‘ghost ships’ could be out there?
3 I’m worried about my neighbour’s new ‘shed’ and what he intends to use it for
4 ‘If all the immigrants go back, who will work in the meat factories and do the crap jobs?’
5 DUP pleads with UK to reduce salary threshold for migrant workers coming to North
6 Person claiming to represent ‘ghost ship’ owner comes forward
7 Gardaí investigating four-lane motorway sulky race
8 Jewish council dismayed at Sinn Féin TD’s ‘unacceptable’ tweets
9 No hospital bed for adult son ‘threatening to kill’ parents, court told
10 Expert tips: A dentist on how to have perfect teeth
11 I’m happy I went vegetarian. I have no desire to eat meat again
12 Paraic O’Donnell: MS is meticulously destroying me. I am being unmade
13 How can I view my dead brother’s will if I’m not the executor?
14 Walk for the Weekend: Rambling on the white sands of Inishbofin, Co Galway
15 How is UK changing immigration system and how will it affect Ireland?
16 Miriam Lord: Photo-ops give way for occasional talks
17 Letter from Caroline Flack describes inner turmoil as inquest opens
18 Memo to Sinn Féin: Not ‘Southern State’ or ‘Free State’, the name is Ireland
19 Entry screening for coronavirus ‘wouldn’t work’
20 Irish backpackers in Australia can extend visas to help bushfire recovery
21 Woman had rare insight into Uday's twisted world
22 Love Island tribute to Caroline Flack hides the truth
23 America at Large: Jimmy Conway’s legacy marked from Cabra West to Portland
24 Jump in young Irish adults living with parents among highest in EU
25 Ireland keep same line-up but Bono and Paul O’Connell join backing band
26 Just 8,000 houses built last year offered for sale on open market, says CIF
27 UK immigration rules ‘spell disaster’ for care and hospitality sectors
28 Planners probe Dermot Bannon’s garden bath den
29 New Sinn Féin TD apologises for ‘glib, off-the-cuff tweets’
30 The Call of the Wild: Harrison Ford in one of his most engaging performances
31 Over-competition in sport is bad for children’s mental health
32 Fine Gael should swallow its pretend humility
33 The Irish Times view on the UK’s migration rules: crude and self-defeating
34 Two candidates for Ceann Comhairle are Denis Naughten and Seán Ó Fearghaíl
35 Jim Mansfield Jnr denied permission to attend mother’s birthday party in Spain
36 Violinist plays to save her music as surgeons remove brain tumour
37 Store manager unfairly dismissed for hugging staff members awarded €15,000
38 Trump calls for attorney general Barr to ‘clean house’ in justice department
39 ‘Exposure doesn’t pay bills’: What artists say about freebie culture
40 Gordon D’Arcy: Digging deep only recipe for Twickenham success
Real news has value SUBSCRIBE