All your weekend Gaelic football previews 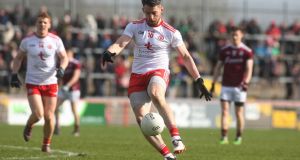 Tyrone’s Matthew Donnelly will be in action against Donegal in the Ulster SFC semi-final at Clones on Saturday. Photograph: Lorcan Doherty/Inpho

ALL-IRELAND SFC QUALIFIERS ROUND ONE
Offaly v London, O’Connor Park, 1.30
London could have been handed a kinder draw than this. They’re doing plenty right and if they reproduce the Galway performance they should beat the six-point spread. But Offaly are finally heading in the right direction and shouldn’t be ambushed. Verdict: Offaly

Leitrim v Wicklow, Páirc Sean MacDiarmada, 3.0
It would fairly take the shine off Leitrim’s year of they followed such a successful league with a two-and-done summer. They’ve beaten Wicklow in their last three league encounters and can hold serve again here. Verdict: Leitrim

Wexford v Derry, Innovate Wexford Park, 4.45
These two played out a hilariously loose Division Four game back in March - Derry won 3-21 to 4-16 in the joint-highest scoring league match of the decade. Hard to imagine the same sort of fun in this one, although the outcome ought to be similar. Verdict: Derry

Louth v Antrim, Gaelic Grounds, 7.0
Louth haven’t lost to Antrim in league or championship since 2010. As long as walking into the Dublin propeller hasn’t shredded Louth for the summer - and there’s no particular reason it should have - Wayne Kierans’s side can keep that run going. Verdict: Louth

ULSTER SFC SEMI-FINAL
Tyrone v Donegal, Kingspan Breffni Park, 5.0 (Live RTÉ/BBC)
Tyrone have conceded more goals (three) in this year’s Ulster championship than the previous two combined. Whether this is a feature or a bug of their more expansive style of play is something Donegal will probably need to test tonight if they’re to put a halt to a run of three years of championship defeats in a row. Considering the threat that Cathal McShane and Mattie Donnelly are likely to pose at one end, it seems unlikely that Donegal will see this through unless they can beat Niall Morgan at the other.

It will be fascinating to see how brave both sides are here. There’s a fair chance Tyrone can get this done if they revert to their style of the past few years because Donegal have shown no sign of being able to break it down. But in the long run, that’s not a whole pile of use to Mickey Harte’s team. They know they can bore teams to death in Ulster. They also know it won’t win them an All-Ireland. Decisions, decisions.

If both sides go at it, this will be a sizzler. Donegal have been a work in progress for a couple of years. This could be graduation day. Verdict: Donegal

LEINSTER SFC SEMI-FINALS
Laois v Meath, Croke Park, 2.0
Meath’s rising stock will be tested in a fixture with no recent history, as the counties haven’t played in seven championships. Having achieved promotion back to the top division, they’re also targeting a provincial final and ultimately, last eight place.

Their defence is far better this year and up front has been ticking over with Cillian O’Sullivan oiling the wheels and Mickey Newman’s shooting features of a collective that has been fairly accurate going forward. Lucky against Offaly and largely untroubled by Carlow, this will be more of a test.

Under John Sugrue, Laois have improved all the time. Even two weeks ago, they saw off a Westmeath team that had got the better of them twice this season. Forwards Evan O’Carroll and Paul Kingston were sharp and they defended a narrow lead impressively during the closing minutes.

They have a shot at this but for Meath there’s just one acceptable outcome.

Dublin v Kildare, Croke Park, 4.0
Eight years ago at the same stage, Kildare were available at 2/1 to win this fixture; this weekend they’re 20/1. It’s the rise of Dublin, who have won six All-Irelands in the meantime but also the decline of Kildare, All-Ireland semi-finalists in 2010.

Even last year’s championship advance to the last eight hasn’t been followed up with any conviction. Cian O’Neill will be pleased that they found a response to the draw with Longford but this is a task of a different order.

Dublin were efficient against Louth, the attack showing better form than during the league with a prolific input from Cormac Costello, deft early touches from Paul Mannion until his red card - he’s back after having it overturned by CHC - and an eye-catching turn off the bench by John Small.

Most attention focused on the back, however, where Rory O’Carroll re-appeared like some ancient explorer back from seafaring to the southern hemisphere.

Kildare aren’t without their strengths. O’Neill reckoned that last week’s replay was their best performance of the year and the forwards clicked with all the starters scoring from play except the unfortunate Jimmy Hyland, who went off injured early on.

They gave this a rattle two years ago - Dublin’s only less-than-double digit win in Leinster since 2013 - but will be up against it here.

ULSTER SFC SEMI-FINAL REPLAY
Armagh v Cavan, Clones, 4.0 (Deferred coverage on BBC NI)
Armagh’s epic sweep through the province remains on track but Kieran McGeeney will be disappointed that they didn’t simply close it out when they had the initiative for most of the second half although Cian Mackey must have thought that his critical intervention off the bench had been crowned by a winner for Cavan in the 69th minute.

Armagh made it hard for the favourites, though, and their impressive range of scorers looked to have broken the back of an ultra-competitive contest.

It may just be however that Cavan have learned enough from what went wrong seven days ago to make a better fist of playing to their strengths and impose their stronger collective on Armagh’s individual talents.

ALL-IRELAND QUALIFIERS, ROUND ONE
(Extra time if necessary and winner on the day)
Monaghan v Fermanagh, Clones, 1.45
Home advantage and the scalding experience of last year’s smash and grab should give Monaghan an edge in this. They weren’t brilliant in losing to Cavan and may be running on empty a bit at this stage but Fermanagh’s cautious set-up invariably militates against chasing matches and eventually the strain tells, as it did against Donegal last month. Verdict: Monaghan to win

Down v Tipperary, Páirc Esler, 2.0
Two victims of local rivalry in their respective first rounds. Limerick’s ambushing of Tipp looks incomprehensible after the former’s demolition by Cork and Liam Kearns’s team surely have better in them but Down’s defeat by Armagh wasn’t in the same category of discouragement and their improved organisation under Paddy Tally plus home advantage give them an edge. Verdict: Down to win

Carlow v Longford, Netwatch Dr Cullen Park, 3.0
Longford have the disadvantage of having to travel and play for a third week - plus extra time - after their prolonged tussle with Kildare. Carlow have no comparable encouragement after getting dusted down by Meath and yet again their discipline was an issue: two black cards and a red. If Longford can catch their breath, they have every chance. Verdict: Longford to win

Westmeath v Waterford, TEG Cusack Park, 3.0
Narrow defeats for both teams in their provinces but there the comparison ends. It was hugely disappointing for Westmeath to lose to Laois and how they respond will determine their prospects on the outside track. Waterford were very competitive against Clare and will be buoyant but that probably isn’t enough. Verdict: Westmeath to win

1 Six Nations: A 21st-century tournament that saw Irish rugby come of age
2 David Clifford sends everyone back to their corners unbeaten
3 Sublime 67 leaves Rory McIlroy right in the mix at Torrey Pines
4 Six Nations: Ireland are contenders but England still the team to beat
5 Weekend football previews: Meath return to the big time with trip to Tyrone
Real news has value SUBSCRIBE