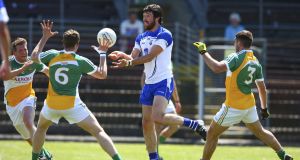 Players are strongly against the proposed change to the hand pass rule. Photograph: Ken Sutton/Inpho

The Gaelic Players Association (GPA) has come out in opposition to three of the five proposed football rule changes, which go before Saturday week’s Central Council meeting, and if successful, will be trialled in the 2019 national league.

A statement from the GPA on Thursday outlined the position taken after consulting “widely with all football squads and former intercounty players in recent weeks”.

As well as surveying opinion on the playing rules, the GPA consultation also established that players were in favour of a second referee to assist in the implementation of the trial.

Side-line kick (which must go forward unless in an attacking position within the 13m line): Players against this proposed change

The Mark (to extend it to attacking catches within the 20m line): Players marginally in favour of this proposed change

Sin Bin (10 minutes off the field to replace automatic substitution for the remainder of the match as the sanction for a black-card infraction): Players marginally in favour of this proposed change

“This feedback has been submitted to the Standing Rules Committee on Playing Rules as part of a wider consultation with referees, coaches and officials.

“While the GPA supports measures to develop our games it is important that any rule changes are introduced with the aim of enhancing the playing experience for players and to provide a greater spectacle for supporters.

“The GPA understands the difficulty of implementing change and acknowledges the significant efforts made by the Standing Rules Committee in this regard. We urge an Coiste Bainistíochta and Central Council to take on board the views of players before deciding on any further course of action at their respective meetings later this month.”

Responding to the survey findings, GPA chief executive Paul Flynn said that players had expressed misgivings that their league campaigns could be compromised by the trialling of the experimental rules during next season.

“The GPA has presented the survey findings to the GAA with detailed squad feedback and we have made it clear how important it is that the feedback is taken on board before any decisions are made.

“For many squads promotion from the National Football League is their main objective for the season. Implementing all of these significant rule changes at this stage, they fear, would disrupt their detailed game plans which have already been developed over the past couple of seasons and it could cost them a promotion.

“Players are also of the view that consideration should be given to the introduction of an additional referee to help apply any new rules. The GAA must be fair and reasonable in how it decides to move on the proposed rule changes. Players, fans and officials deserve nothing less.”

4 Rory McIlroy leads Tyrrell Hatton by one in Abu Dhabi