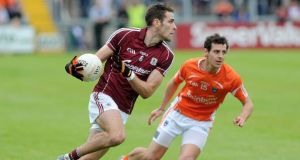 Nothing beats the crazy tension of the high-wire championship knock-out clash, as long as you’re the team left standing at the end. For as long as this game stayed balanced, both Galway and Armagh were adamant it would be them.

And in the end it could have gone either way, Galway somehow surviving the last 21 minutes – plus three more of added time – without a score. They also lost two players to black cards at the death, although by then it hardly mattered. Galway survived, Armagh are gone.

There were deserving of it too, playing with the sort of fighting spirit not seen in Galway football for a few years, much to the delight of manager Kevin Walsh. He was part of the Galway team who came through the inaugural football qualifiers, in 2001, to win the All-Ireland outright, also beating Armagh on route, and while it’s a bit early to be expecting any repeat, at least Galway are still in the hunt.

“Yeah, I thought we played like a very tight bunch,” said Walsh, and without that spirit, there’s no way Galway would have escaped from Armagh with the win.

“And to be fair, I think if yourselves, and the public, and everybody else looked deeper into the Mayo match, I think we got a bit of unfair criticism. But that’s great, because it drove them on. So I’m very happy with the result. Anytime you win there is a thrill, but especially when there’s a big challenge in front of you, like Armagh were. It’s great to get the result in a place like this.” Terrific goal No real complaints from Armagh then, even if they wanted to. Bar a very brief lead on 12 minutes, they were nearly always chasing the game – most desperately on 47 minutes, when Damien Comer snatched a terrific goal, fisting the ball over his head and into the Armagh net, after a free from Paul Conroy fell short. A Danny Cummins point and a Gary Sice free then moved Galway seven points clear, 1-12 to 0-8.

Even with 21 minutes to go, Armagh needed something big to get them back it.

Not long after that they may well have had it, when Jamie Clarke, carefully marshalled all afternoon by Cathal Sweeney, was caught from behind when running at goal, prompting calls for an Armagh penalty. Meath referee David Gough didn’t want to know. 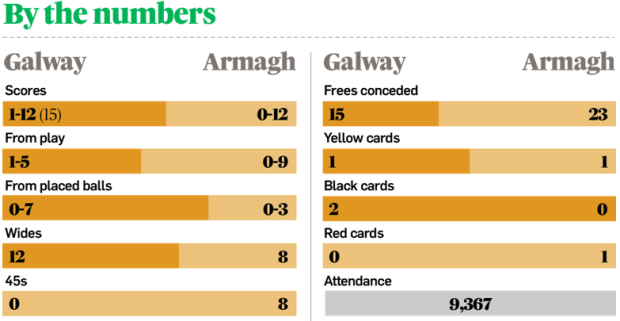 “You are not allowed to say anything about referees,” was how Kieran McGeeney addressed that decision, although the Armagh manager was a little more cutting about the decision to move forward the free that resulted in Comer’s goal.

“But it’s very disappointing, I can’t say much more than that. There were a couple of different things for us, giving away a sloppy goal, giving the ball away cheaply, things that had been causing us problems all year. And what has been killing us for most of the year is we are not getting more than the 12 or 13 scores on the board . . . . We have to be more clinical in front of nets.”

In truth, neither team created any more goal chances: if Comer’s goal was something of a fluke, it was also the difference, as without it Galway may not have survived. They ended up with 12 wides, Conroy guilty of several, with Michael Lundy missing a few too, and yet they survived – losing both Sice and Sweeney to black cards in injury time in their frantic effort to keep Armagh at bay. Blanket defence Clarke was held to a single point, and while Tony Kernan and Mark Shields added one each when introduced, there was definitely something missing in the Armagh attack.

Only when they completely abandoned their blanket defence did they actually worry Galway, although by then it was too little too late – especially with Fiontán ÓCurraoin and Tomas Flynn ensuring Galway a strong foothold in midfield.

Galway look like an improving team, although surely can’t afford another scoring drought the next day.

“No, but I’d be worried if we didn’t try to make scores, and we did,” said Walsh.

“And my players were more than happy to put their tongues out, sprint back, so the spirit is there. It’s all about the next round now, and we’re there. These are the type of games you learn from. And we still have some learning to do.”