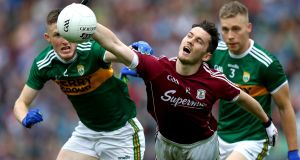 Ian Burke has either converted or directly assisted exactly one third of Galway’s scores from play so far this summer.

If Dublin can contain the Corofin corner forward in Saturday’s All-Ireland semi-final, they’ll have one foot in next month’s decider.

Burke is Galway’s second top scorer from play in the 2018 Championship, second only to Damien Comer at the edge of the square. However, the former Under-21 ‘Hero of the Future’ (2013) is a class above the rest when it comes to his assist count. A corner forward who's first option is to pass rather than score, but always just a quick hop, solo dummy or swivel away from doing either.

Burke came on for the final 12 minutes of the Connacht quarter-final win over Mayo, with the teams level 0-9 apiece. He assisted two points, and played the penultimate pass for Johnny Heaney’s goal. After missing Galway’s promising first half of the season due to his club commitments, he didn’t need long to remind everybody of his value to this team.

In five starts, and that late substitute appearance against Mayo, he has directly assisted 18 of Galway’s points by either giving the final pass, or being fouled for a converted free (0-4).

On top of scoring 1-9 from play, Burke’s spacial awareness, his timing and weight of pass, and his selflessness and movement, allow the likes of Comer and Shane Walsh to flourish.

Remarkably, Burke is the only Corofin player in the reckoning for Kevin Walsh’s team, despite them winning the club All-Ireland in style back in March (their second title in the past four years).

When Corofin blew Nemo Rangers away in this year’s (last season’s) club All-Ireland final, Burke directly assisted 1-4 with the final hand or kick pass, as well as scoring two points himself. He made the pass before the assist for another 1-2. Galway may only have one Corofin man featuring in Croke Park this weekend, but who better than Burke to showcase their trademark fluid passing, playing it the Corofin way. Small in stature, but the chief puppeteer for club, and now county.

Galway’s biggest scoring total in a match in 2018 – against teams in the top two divisions of the league – came in their Super 8s clash with Kildare. Burke assisted six scores that afternoon, they were all with his hands. He’s only assisted one score with his foot so far this summer. Your typical flashy corner forward he is not, Burke will always take the most efficient route at the expense of headlines.

The 25-year-old’s peripheral vision and decision making, combined with his intent and energy when in possession, creates pockets between the lines and links Galway’s running game with a diagonal out ball in the inside line.

He’s set up nine different team mates for scores, and only twice have they been his fellow inside forwards (Damien Comer on both occasions). Aside from those he’s provided two assists for Walsh, and two more for Sean Kelly, one for Michael Daly and the rest have been for Galway defenders and midfielders.

Next highest on the assists leaderboard is Comer, with five of his 14 the result of him being fouled for converted frees, while Shane Walsh has 11 assists. Johnny Heaney has the fourth highest amount, seven, while the team's championship average is just below three.

Four of Walsh’s assists have created scores for Comer – the Galway half-forward is the man to have assisted his lethal number 14 the most so far this summer.

Of Galway’s 20 scorers from play this summer, Annaghdown’s Comer is top of the pile with 2-11 and he will certainly be playing a major part in Jim Gavin’s tactical briefings this week. Walsh also makes up the the top three for the team’s championship scorers from play, he has managed 0-11 (followed by young Sean Kelly with 1-6.).

Since their campaign kicked off in Castlebar in May, one of the most attractive features of Galway’s attacking play has been their forwards’ ability to kick off both feet. Walsh in particular, as well as Comer, and Burke is no exception to that – the former Under-21 All-Ireland winner (2013) has scored 0-4 off his left this summer and 1-5 off his right.

Galway will expect Burke, with so much big game experience from his club and underage successes, to be at his scoring and assisting best against the Dubs. He has already won three All-Ireland medals in GAA HQ.

The Tribesmen’s gameplan will rely on keeping things tight early on. In their championship matches so far this year (against Division Two opponents or higher) Galway have scored an average of just over 0-2 in the opening 15 minutes, that is 12 points in five opening quarters (aside from the Kildare match and that’s 0-7 in 60 minutes). In the same time period in those matches they’ve conceded a combined total of only 0-13.

The Connacht champions then aim to open up late on. In those five matches they scored a combined 2-21 (2-4 scored in this period against Sligo also) and conceded 2-13 in the final 15 minutes. Against Dublin in the league final, they achieved their target of keeping things tight from the get-go, the score was 0-4 to 0-3 to the champions on the 15 minute mark. In the final quarter however they were no match for Dublin and were outscored 0-6 to 0-2. Against Monaghan they were outscored 0-0 to 0-3.

This time around and Galway must go after that final 15 minutes or just settle for respectable defeat again. While Dublin will be after the little assist master to stop him exploiting the open spaces of Croke Park as he has on many a big day. Next Saturday against the reigning champions is his biggest yet.