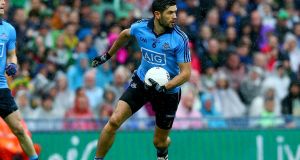 It’s 10 summers since Paddy Christie won his last Leinster title. Dublin spent half of the years that followed scavenging the capital for a fullback. The rest, well defence has been the platform for Dublin winning three of the last five All-Irelands.

The man who finally filled that gaping void however is gone again, but rather than look to outright replace him Jim Gavin’s team will look to step up collectively. Key to that is their sweeper six - centre back Cian O’Sullivan.

Rory O’Carroll’s decision to leave the panel this year leaves Dublin without an obvious full back replacement. Yet rather than try to manufacture one, as was the case with Christie’s initial replacements - Barry Cahill, Ross McConnell and Dennis Bastick - Dublin are relying upon their defensive unit to each carry out a specific role. Not dictated by the number on their back.

Neither have they looked to throw their young pretender straight into the deep end - Under-21 full back David Byrne has impressed in the number four jersey throughout the league and Leinster campaign. A young and inexperienced Rory O’Carroll would ship five goals at full back in his first provincial final in 2010.

This Dublin team though is an entirely different proposition to the one he came into. First through Pat Gilroy, and since adapted via Jim Gavin, Dublin’s defence has been at the core of their recent dominance. But when their faith in ability alone proved their undoing in 2014 they introduced a sweeper centre back - and have not looked back since.

In the 2014 season Dublin were rampant - their attacking football looked unbeatable, although they were conceding an average of almost 0-17 per game. During the league campaign that year their average concession was 0-16. Ultimately Donegal would knock them out in the last four scoring 3-14.

Last year they made the necessary changes and their average concession dropped four points to 0-12 in the league, and likewise to 0-13 in the championship. They eased their way to both titles. This year their league average remains the same, and their championship average is also hardly over 0-12. 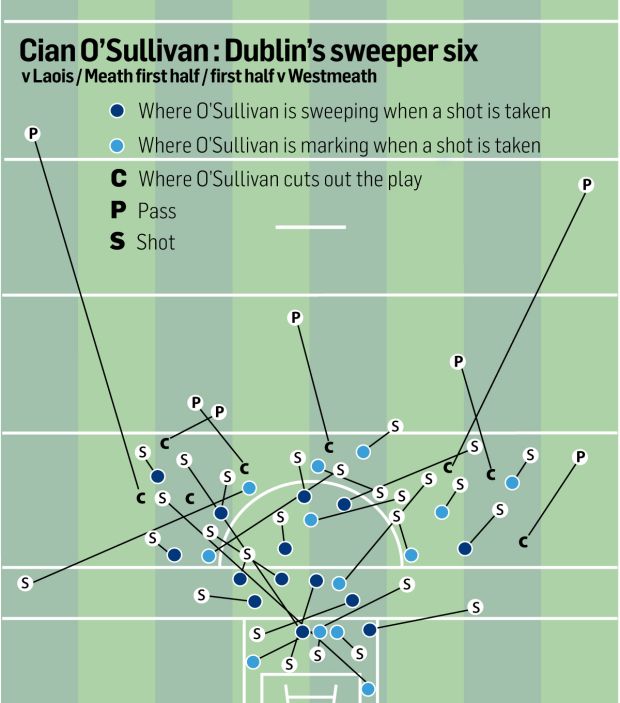 When you consider their commitment to attacking football, it’s an impressive average. Of last summer’s quarter-finalists only Donegal and Kerry had a slightly lower average in the championship. The 2015 Ulster champions had the second best defence last summer - conceding an average of 0-12 per game. Only Derry were tighter. Although they played only one Division One team in their four games. (Louth’s defence was the worst, conceding an average of nearly 3-18 per game).

The defensive sweeper and counter offensive of the Ulster team proved too much for Dublin two summer’s ago - but since O’Sullivan has dropped back from midfield to number six he has provided that missing solidity. While most modern sweepers are almost robotic in their marking of zones - O’Sullivan reads the game. He will drop when his inside line are isolated, he will mark if there are dangerous overlapping runners, then he will push up when numbers have filtered back. He will also attack upon turnovers, often still as a free man.

Against Laois in the Leinster quarter-final he would make four interceptions in his sweeper role. Yet from the 12 attempts at scores (from play) made by Laois, he was operating in his sweeper role for only seven. On the other five occasions he had pushed on and marked a free man, he was adapting to the play. Which may appear an advancement of the now commonplace shadow the D sweeper, but is as much a return to the traditional role of a centre back. Reading the play, cutting off the centre. A jack of all trades.

Likewise in the first halves of the semi-final win over Meath and Leinster decider against Westmeath (the second halves were too one-sided to make an accurate analysis) when the opposition had scoring chances O’Sullivan was as often marking a man as he was shepherding danger zones.

Fast, strong, aggressive, while still being a calm presence in possession - an attribute that O’Sullivan has that is not as abundant across the Dublin defence is height. With James McCarthy an injury doubt the Kilmacud defender will be needed against Donegal this Saturday, to drop deep and compete in his own square under high balls.

If fit McCarthy is expected to pick up big Michael Murphy, if not Philly McMahon will get to know him when he moves into the full forward line. Either way, the Dublin defence will be keen to avoid any one on one situation.

Their short fullback line has been talked up as a weakness for much of the summer, yet in the Laois game (six) and the first halves of the Meath and Westmeath encounters only 10 high, long balls were put in. Only five were one on one situations. The result being, two points and three goal chances. On the other occasions Dublin had as many as four men in and around the aerial contest, including O’Sullivan.

Therefore the ball needs to go in quick, and a running game needs to operate in tandem to draw O’Sullivan and co out to pick men.

A half-time lead helps too - four of the last five teams to beat Dublin in league or championship went into the interval ahead. Outscoring the Dubs for a combined 3-8 to 0-5 in the final five minutes of the half in those games.

Above all though teams need to be clinical. As none of the opposition in Leinster have been so far. Or any of the 11 other counties they’ve played, stretching back 24 games, since their last defeat. But Donegal do know how it’s done.