‘Fenian games’, letters from Sinn Féin and the birth of GAA on BBC NI 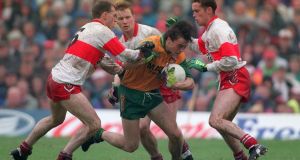 John Duffy of Donegal in action during a clash against Derry in 1993. Photo: Inpho

To most, the light sunshine of May 13th, 1990 in Castleblayney had little enough to distinguish itself from a lot of Ulster Championship openers. Monaghan served up Antrim a 3-17 to 0-8 tanking and the summer was off to an underwhelming start.

The intrigue, however, lay in the forensics. A crew of riggers disassembled a scaffolding tower. The cherry pickers behind either goal were lowered and brought away. Miles and miles of cable was being rolled back up. The age of television had finally caught up with the Ulster Championship.

For the first time, BBC Northern Ireland were filming an Ulster Championship match for their brand-new Sunday nights highlights show ‘The Championship.’

The idea came from Jim Neilly. A former rugby prop forward with Instonians and Ulster rugby, he had been appointed as Head of Sport for the network in February 1989.

At that point the stations’ output was limited to around a dozen outside live broadcasts of rugby games, Northern Ireland internationals and a smattering of Schools’ Cup and motorcycling.

Neilly envisaged a different world. After all, if they were paying the outside broadcast crew on year-long contracts, why wouldn’t they work all year round?

He brought a few grandees from the Ulster Council to head office, among them future president Peter Quinn, and watched their jaws hit his desk when he said they wanted to cover every single game with a Sunday night highlights package.

If there was any opposition, it didn’t come from upstairs in the Beeb, who were enthusiastic backers.

But, as Neilly recalls, “there were one or two eyebrows raised and one or two nasty phonecalls made, a threat made from people who disapproved of what they referred to as the BBC showing ‘Fenian games.’

“I remember going onto the Talkback programme with David Dunseith and had a debate with a well-known Unionist politician from in and around Newry and he was incandescent that the BBC were going to go down the road of televising games from another country and another culture and everything else.”

It was a bumpy take off that Neilly dismissed as background noise as he assembled his broadcasting team. He had done his time in front of the camera and felt he needed a break, “in case I frightened any small children” he chuckles. He put the clubbable Mark Robson in the studio seat and got an arched eyebrow in response from a superior.

“And I asked, ‘do you have a problem with a Co Down Protestant?’”

Neilly wanted a serious broadcaster, not a cheerleader. There would be technical bits and bobs throughout the show and they needed someone who could take direction through his ear mic. In any case, he had the redoubtable Sean McCague, another future president of the GAA, sitting opposite him providing analysis.

At the grounds themselves, he created a perfect mix for the commentary feed. Jimmy Smyth had captained Armagh to the 1977 All-Ireland final. His mid-Ulster rat-ta-ta-tat voice blended perfectly with co-commentator, the laconic east Fermanagh stylings of another All-Star in Peter McGinnity.

“I am not saying we were the best commentary duo in the world, but I thought people got the impression we knew what we were talking about,” says Smyth now.

“We just hit a Golden Era for Ulster football. The easiest matches to do were the real close encounters. Derry-Donegal in the rain in 1993. Those type of matches.

“Not because of the teams, but the intensity of the games at the time. Those games were absolutely gripping. The game finished and you were left staring into space.”

The entire crew established an instant rapport. They stuck up for each other. McGinnity and Neilly came from different worlds but instantly clicked.

“I loved big Peter,” says Neilly. “He used to talk about a ‘fut’ (foot). People wrote in asking what a ‘fut’ was and I used to write back, ‘these people are not members of the Royal Shakespeare Company. ’”

As the years went on, the programme evolved. The first two years they had a highlights package, and when Down came from nowhere to win the All-Ireland final in 1991, they had already secured a package for the next three years to show all the Ulster games live, and follow their progress through semi-finals and finals.

This being Ulster, there was never a row over sensitivities far away and they caught some flak when the first live broadcast between Derry and Tyrone in Celtic Park didn’t include Amhrán na bhFiann.

It was at this point too that Robson left to pursue other projects and Neilly poached the honey-voiced Jackie Fullerton from UTV to host proceedings.

“Jackie first and foremost liked being on TV,” said Neilly. “He would have nearly paid to be on TV and he knew that on a Sunday night he was getting a great audience. And Jackie was very popular and he got even more popular because it was a very well-watched programme, and people went into work on a Monday morning and they discussed it.”

Jimmy Smyth’s sister Bernadette worked in the Civil Service in Belfast and come Monday mornings, the topic of conversation among everyone of all denominations in the lift or at the water cooler was of ‘The Championship.’

The reviews were kind. Seán Moran, then of the Sunday Tribune wrote a piece comparing the BBC output as superior to RTÉ’s at the time.

Through his rugby and boxing commentary days, Neilly was friendly with the RTÉ crew. George Hamilton was groomsman for his wedding and Neilly is Godfather of George’s daughter Ciara.

Head of Sport for RTÉ, Tim O’Connor, called Neilly one day mock-complaining of a crew of Ulster Council men puffing out their chests to Central Council, saying, ‘Look at the job that big hairy Protestant bugger is doing for us! Look at the cameras he has, you boys don’t know you’re living down here!’

O’Connor pumped him for information.

“People were talking about the innovations that were happening on the BBC, so I said to Tim that we were working on an ‘in-ball’ camera.

“And there was a silence after that, and he said, ‘you’re taking the piss out of me, aren’t you?’”

Once the first season got going, BBC had requested Neilly head off to Italia ‘90 and follow Jack Charlton around the place. While there, he bumped into the Irish Football Association secretary David Bowen who admitted - confessed even - that he was enjoying ‘The Championship’ immensely. Indeed, found it fascinating.

“He said he did a bit of checking,” recalls Neilly, “and he understood that at some stages, some of the programmes were getting 55-60 per cent of the audience share on a Sunday night. So he laughed and said, ‘that means there’s a lot of Protestants watching it!’”

Three weeks into the first year, Neilly made his way into his office one morning and his secretary Ruth Croft handed over a bundle of mail, noting that he might want to read the letter on top.

“And there it was on official Sinn Féin notepaper. A letter from Gerry Adams congratulating me on our coverage of Gaelic football and what it had done for the game and the people involved in it and so on.”

Out of nowhere, Ulster took off. Every game was a killing field, the intensity of that period unmatched in any period in any province then or since in football, and BBCNI couldn’t believe their good fortune.

“We felt in the BBC that it was ‘our teams’ going to Dublin. It was our teams competing for the All-Ireland Championship and when Ulster teams got to the final, we got to broadcast the games live as well as RTÉ,” says Neilly.

In 1995, UTV came in and grabbed the rights. Jimmy Magee would be the man to call the games. But after a while, it slipped off the schedule.

Nonetheless, the mould was broken. Gaelic games became mainstream entertainment at the same time as an IRA ceasefire was called in 1994 and a fragile peace was carefully constructed.

It took Neilly, from Ballymena planter stock, to take Gaelic games out of an odd ghetto not of its own making.

“I felt, irrespective of my own background, that Gaelic games, the people attending it, was being undersold. The decision was the right one. The BBC in Belfast accepted that,” he says.

“It wasn’t as if we were pushing the culture. To me, it was about sport and the fact it was watched by so many people, it was being watched as a sporting programme. And the more they watched and understood it, the nuances of the game, skills and fitness, the more they appreciated it. I think it opened eyes and opened doors.

“Before I did all this thing, I thought it could only be positive for Northern Ireland and as it turned out, it was.”

In their own words: Memories of the good days

“I was given two instructions. One was; ‘Talk’, and the second one was; ‘Don’t Talk’. And that was purely for editing. I have to say, I enjoyed it and working with Peter McGinnity. He brought an eye to it.”

“It really was fabulous. It was the best seat in the house, at the best matches, throughout the year, throughout a number of years. It was really was a bit special and I enjoyed every minute of it.”

“You know that joke about Jackie Fullerton? It didn’t happen. Adrian Logan dines out on that. Jackie wouldn’t have let himself down like that. The joke went, ‘And now a later Gaelic football result, Slaughtneil 1-11, St Gall’s 2-6 so congratulations to whoever won that one.’ And that never happened. But funny!”