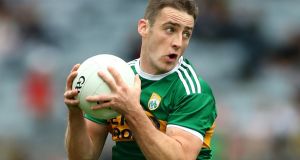 Kerry’s Stephen O’Brien has backed the drug testing regime for inter-county players. He was commenting on the controversy that has subsequently seen Carlow footballer Ray Walker accept a four-year suspension for a doping violation – although denying the banned substances were taken intentionally.

“Definitely,” said O’Brien speaking to a media tele-conference, “100 per cent: you have to have testing and the threat of getting caught. The penalties are very severe for a positive test and that’s probably correct because it’s very important to have everyone on a level playing field.

“I can only speak from our perspective and our dietitians and those who advise us could not have stressed any more how important the issue of strict liability was for anything you put in your body. Obviously you’re not getting tested every game but I can’t see performance-enhancing drugs being a big issue but I don’t know for sure.”

Based in Cork where he is an engineer in Ringaskiddy with pharmaceutical company Janssen Sciences, O’Brien continues to work on site but hasn’t seen Kerry in a few weeks. He is concerned for his home town of Kenmare which is so reliant on the tourist trade and where his mother has a B&B.

Life at present is observing the usual routines of an inter-county panellist these days, video conferencing with Jason McGahon (Kerry GAA’s head of athletic development) and manager Peter Keane.

Although he endured the ultimate disappointment of losing last year’s All-Ireland final to Dublin after a replay, O’Brien had a very good season and ended up as one of his team’s candidates for Footballer of the Year and considered unlucky not to win a first All Star.

He took his game to a new level, combining the pace that marked him out as a prospect as early as the 2011 Sigerson Cup win with UCC with indefatigable work-rate, as exemplified by the goal against Tyrone in last year’s All-Ireland semi-final.

The season after losing a final – especially against a Dublin side on the trail of five-in-a-row – is a regretful time for any team let alone one with so much enforced time on their hands but he reckons that living in Cork has insulated him from excessive angst even if the lessons of 2019 need to be absorbed.

“You have to credit Dublin for coming back and showing the team that they are. You have to focus on a couple of key turnovers that gave them possession, gave them momentum. Could we have seen that game out better?

“We probably could have. They were very aggressive in their press as well. That’s something that we can learn from – that even if we are behind again, we can implement an aggressive press like that when the game was going against them.

“It’s very impressive that they were able to do that and it’s hard for us as a team for every player to recognise that, especially when you’re talking about players nearly physical exhausted as well in the closing minutes.”

Like all players, he would love to resume on-field activities but is also sceptical about some of the suggestions around frequent testing for inter-county players to facilitate collective training.

“I know they’ve discussed things like that in the Premier League and the NBA where they could bring all the professional teams to a control area. That’s just not possible in GAA – it’s not a professional organisation.”

He is more open to the idea of playing behind closed doors were that to get the green light from the health authorities and makes an interesting point about players being accustomed to the environment of an empty stadium.

“Obviously, it would be very difficult for supporters not to go to matches that they’re used to going to. From a players’ point of view, we’re used to it in training. We train in Fitzgerald Stadium, which is a huge stadium.

“Most of the challenge matches we’ve played over the last number of years have been behind closed doors in pitches around the country. The players, I’d be okay with playing like that. You wouldn’t need a crowd from that perspective but it probably isn’t realistic from a GAA perspective to have games behind closed doors.”