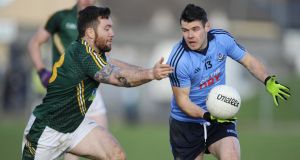 That all days out this year might have such happy outcomes: both managers declared themselves satisfied, the bumper pre-season crowd of 7,500 were entertained by a stirring second-half comeback by Meath and neutrals were spared the bleak prospect of near-certain death from exposure had extra time been necessary on a freezing afternoon in Navan.

Eight minutes into the second half of this Bórd na Móna O’Byrne Cup semi-final, Eoghan O’Gara - who had been denied twice in the first half by Meath ‘keeper Paddy O’Rourke when in promising goal scoring positions - leapt high to pluck down what looked like a fading shot at a point from Tomás Brady and stuck away the hardest of his three opportunities.

That gave Dublin a nine-point lead and Meath and their supporters unpleasant flash backs to last year’s Leinster final.

To their immense credit though the home side dug in and turned the tide of the match, outscoring their opponents over the next 27 minutes by a hefty 1-8 to 0-2 to tie up the match with O’Rourke’s 50-metre free dropping over the bar a few seconds into the signalled two minutes of injury time.

But with the crowd and at times the players becoming frenzied in pursuit of a memorable win it was Dublin who showed sufficient calm to rally in the time that remained and filch two points from replacement Philly Ryan and O’Gara.

Winning manager Jim Gavin said that his team were using the competition as a means of building up fitness and assessing the players at his disposal.

“It was a great game for this time of year, a pre-season tournament. I think both managers and teams would have learned about themselves in some way. We’re in experimental mode, giving players opportunities to stake a claim in the national league squads today.”

The experimentation may have played a part in squandering the big lead, as two of the most impressive players for Dublin, Shane Carthy and Tomás Brady - both among those aspiring to first-team involvement in the weeks ahead - were withdrawn early in the second half.

The winners had actually seized and lost the initiative twice in the match, allowing Meath up on their shoulder in the first half before the second-half collapse.

Their success was largely built on the accuracy of Dean Rock, who shot eight points, three from play, including a vital two in the second half, which helped to stall Meath’s growing momentum. Part of the problem sprang from centrefield where under-21s Harry Rooney and Adam Flanagan both earned commendation from manager Mick O’Dowd, who described their displays as ‘outstanding’.

In the middle, Dublin re-introduced former Footballer of the Year Michael Darragh Macauley to the fray in the second half but he struggled somewhat to get to the pace of the contest and needs more game-time. Also of interest was the deployment of former Young Footballer of the Year Jack McCaffrey as a wing forward rather than in his customary wing back posting.

McCaffrey never managed to get onto open ground and use his pace and it will be interesting to see if this was just random experiment or if Gavin and the selectors envisage a different role for the player this year.

In the first half Dublin were simply more clinical than Meath, who wasted chances up front and for whom wing back Bryan Menton scored as much from play as the entire attack. The team’s defence was however tenacious and hard working and assisted by the lack of precision in their opponents’ attacking movements and passing, kept a lid on things for a half-time deficit of just four, 0-5 to 0-9.

Meath’s second-half comeback from trailing 0-5 to 1-11 was so complete that for about 10 minutes shortly after O’Gara’s goal they were awarded 12 frees in succession by referee Anthony Nolan. Seán Tobin converted two - and somehow missed a straightforward third - to get the recovery started.

The arrival of Michael Newman in the 53rd minute was another factor and he caused difficulties for the previously untroubled Rory O’Carroll, including on the hour accurately judging an incoming ball from another replacement Andrew Tormey to catch and finish to the net.

Dublin looked inert as wave after wave of attack crashed down on them - fearsome defender Mickey Burke even getting up for a point in the 59th minute - but somehow they stemmed the flow and hit late to survive.

Gavin said afterwards that Alan Brogan’s intentions in respect of retirement and the year ahead would be known in the coming weeks.

O’Dowd said the experience would benefit his players, as they get ready to campaign for promotion from Division two.

“This is what we’re trying to get to - we grew up with these full houses in Páirc Tailteann and I’d like this young team to be playing in front of them as much as possible. To do that you have to be in Division One and you have to be performing like we performed in the second half. So that’s our focus.”

Dublin will play Kildare in Newbridge next Sunday in the O’Byrne Cup final, a replay of two years ago when Kildare won an exciting match in Parnell Park after extra time.