Jim Gavin welcomes big guns back into the fold for Monaghan

Costello out injured but Cooper, Flynn and Macauley pushing for Croke Park selection 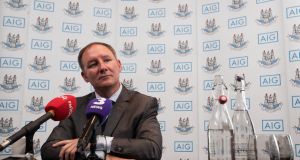 Jim Gavin can call on the services of a number of players returning from injury for the All-Ireland quarter-final clash with Monaghan. Photograph: Tommy Dickson/Inpho

Cormac Costello will not feature for Dublin in Saturday’s All-Ireland quarter-final against Monaghan at Croke Park but Johnny Cooper, Paul Flynn and Michael Darragh Macauley are all pushing for a return to Jim Gavin’s team.

“They’re all back,” said Gavin at this morning’s press conference in the Gibson hotel. “Cormac is back on the pitch, he’s partaking in the training sessions again. It’s just a little bit too early for him.

“This is an ankle injury. It’s a physical contact sport, sometimes these things happen. But he’s back and that’s the big thing. And who knows what happens this week, whether he’ll partake in a Dublin jersey again this season.”

Cooper, a key figure in the fullback line, missed last month’s Leinster final victory over Kildare while Flynn and Macauley are yet to feature in the championship this summer.

“A lot of players are putting their hands up to be involved in the match-day squad,” said Gavin. “That’s great to see. They have always been about the collective and that’s what they’re about now.”

1 Born to ride, born to win: Sam Bennett, the making of a green machine
2 Leinster look ready to step things up and burn off Saracens challenge
3 Connors now delivering on his massive potential
4 Keith Duggan: Surreal story of John Delaney needs to act as a wake-up call for FAI
5 Rory McIlroy battles to stay in the mix as Patrick Reed leads the US Open
Real news has value SUBSCRIBE