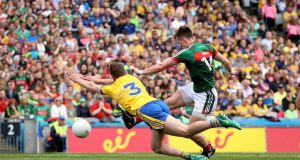 Trust Mayo to yet again come up with the one storyline nobody expected. We thought their summer was petering out, that without Lee Keegan here as a late cry-off they might even be in bother against Roscommon. Instead, they handed down a bruising reminder that they’re gone nowhere yet. After a deadening quarter-final round, the football championship looks like it might be worth turning up to see the last four sort themselves out.

This was big boy football from Mayo. It was as if they looked around at the ritual beatings handed out over the past two weekends by Kerry, Tyrone and Dublin and realised that there’s no shame in getting your business done early. In fact, in certain situations, it’s encouraged.

(That one of those might just happen to be a sunny Bank Holiday Monday when folk have better things to be at than sitting through another extra-time may or may not have been in their heads. We thank them for it, all the same.)

Mayo put Roscommon in a vice here and squeezed them until they were dust. They brought a speed and intensity to Croke Park that the Rossies were entirely unable to live with. At times the Connacht champions looked like kids who’d been asleep in a nursery only for someone to turn on a bit of death metal at full volume. They couldn’t have looked more disorientated if you’d dropped them in the middle of Ulan Bator and told them to thumb home.

Mayo had six points on the board before Roscommon managed a shot from play. They blitzed Colm Lavin’s kick-outs, pushing up with a murderous press, bullying Roscommon in the air and gobbling up anyone who wandered out in possession. For the opening 15 minutes, there was virtually no action in the Mayo half of the field. They made Croke Park so small, Roscommon must have felt they were in a UFC cage.

On top of which, when the game was still a game, Mayo’s accuracy in front of the posts was supreme. From their first seven shots, they kicked six points and only dropped one short. Roscommon were under such pressure they could only foul and hand Cillian O’Connor handy frees to get Mayo on their way. Donie Vaughan kicked a point, Jason Doherty and Diarmuid O’Connor got theirs too.

After 16 minutes, Mayo were 0-6 to 0-0 ahead and their only worry was that they hadn’t quite killed the afternoon off yet. They butchered a couple of half-chances for goals, both off botched Roscommon kick-outs. And when Enda Smith and Sean Mullooly got up for the first two Rossie points soon after, it wasn’t out of the question that there might be something in the day for Roscommon yet.

And then there wasn’t. Mayo turned the dial right up to 11 from there to half-time and emptied the game of mystery. Kevin McLoughlin skated through the Roscommon cover, took a hop - and then another hop, unnoticed - and when his marker Brian Stack slipped at just the wrong time, McLoughlin stuck the ball past the exposed Lavin.

From the kick-out, the excellent Aidan O’Shea put Keith Higgins away down the left and his ferocious pace got Mayo in behind again. He stopped on the edge of the square, drew a last defender and put Andy Moran away for another goal. Mayo 2-6 Roscommon 0-2.

Four minutes - and another botched goal opportunity - later, Mayo finally made it 3-6. Higgins did all by himself this time, rampaging down the left again and leaving sundry Rossies in his vapour trail. Faced with Lavin one-on-one, he helped himself to another goal. In the space of five minutes, a four-point game became a 13-pointer.

There was no way back. For the sake of posterity, we may as well record how the numbers tumbled out from there on. At the break, Mayo were 3-8 to 0-4 to the good. Roscommon went score for score for the first four minutes of the second half but Cillian O’Connor put an end to that sort of tomfoolery with a fourth Mayo goal - yet again from a Roscommon kick-out.

Mayo ran the bench. Shane Nally, Declan Drake and Stephen Coen all came on and flicked points for themselves. They could have had another four goals but with the sting long gone out of the game, they started getting careless. Not that it mattered.

Onwards then and Kerry await in the semi-final. Mayo’s endless summer just got another fuel injection.