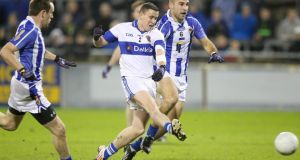 St Vincent’s made the brighter start and took a dramatic early lead when Connolly raced onto Tomás Quinn’s measured pass before unleashing a sublime rising shot past the helpless Darragh Walsh from 14 yards.

Some of the foot passing from St Vincent’s was a joy to behold in the early stages and they gained further reward for their efforts through well-taken points from play by Quinn and Gavin Burke.

St Enda’s gradually began to exert themselves on the contest and a brace of Andrew Kerin frees added to by Donagh McCabe’s superb solo score ensured Ballyboden trailed by just a point at the end of the first quarter.

However, all their previous good work was undone as St Vincent’s grabbed a second goal in the 17th minute with Quinn once again the provider as he outpaced Mark O’Sullivan before supplying Dorney for a facile palmed goal.

Ballyboden responded admirably to that setback and two superb Kenny Naughton points reduced their arrears while the roving Stephen O’Connor added a fine point as St Enda’s enjoyed a n advantage in terms of possession.

Their defensive solidity was still in question however and a well-timed Connolly pass released corner-back Bonnie who fired a composed finish beyond the badly-exposed Walsh in the 27th minute.

A fourth goal arrived for St Vincent’s within four minutes of the restart as Quinn timed his pass to perfection when finding Connolly who nonchalantly beat Walsh from ten yards.