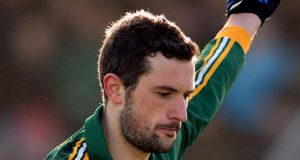 Meath squandered a seven point second half lead and had to rely on a late Eamon Wallace point to give them the share of the spoils at Pairc Tailteann.

Wallace was introduced 10 minutes from the finish and was on hand to salvage a precious point for Mick O’Dowd’s men.

The Royals led 0-9 to 0-4 half-time and that lead increased following further points from Graham Reilly and Mickey Newman within two minutes of the restart.

The hosts seemed to be coasting at that stage against a Laois outfit lacking direction and struggling to repeat the form of the win against Roscommon a week earlier.

However with midfielder John O’Loughlin storming into the game and Donie and Paul Kingston finding the scoring range in attack the O’Moore men hit a dominant streak.

They notched seven successive points to draw level, with the equalizer coming courtesy of the younger of the Kingston brothers on 56 minutes.

Midfielder Bryan Menton restored the Meath lead against the run of play before Donie Kingston shot his fifth point to draw the sides level.

The experienced Ross Munnelly edged his side ahead again from another free but as the game drifted into added time Donal Keogan charged forward before setting up Wallace for the equalizer.

Meath had the edge throughout the opening half with Mickey Newman accounting for seven points, five of which came from frees.

Laois produced very poor fare in that half as they tallied seven wides and hit another four efforts short.

However they showed an abundance of character throughout the second half as they staged an unlikely revival.