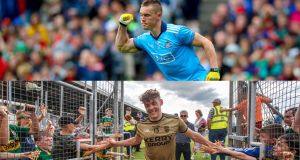 Con O’Callaghan has scorded 4-9 from play in six matches and David Clifford has 0-17 in five this summer. Photographs: Inpho

Dublin have many players who allow them to control the tempo of football matches, Con O’Callaghan is one who brings the chaos.

Dublin have scored 17 goals in seven matches this summer, and O’Callaghan has been involved in nine of them, in his six outings.

The Cuala dual star has scored four goals himself, assisted two and been directly involved in another three. He also raised two green flags during the league.

He’s the team’s second top scorer from play this summer with 4-9, a point behind Paul Mannion who has scored 0-22 but only assisted one goal and scored none. So O’Callaghan has been the chief scoring threat for Dublin, in his fourth season with the team, his third as a starter.

Three years his junior, David Clifford is in his second season with Kerry and is causing similar damage. Just in a different manner. Clifford has scored 0-17 from play in his five matches this summer, making him Kerry’s second top scorer from play. Paul Geaney has scored 2-13 after playing a game more.

Sunday will only be Clifford’s 11th senior championship match. He has an average of just over 0-4 from play in his first 10 appearances. In O’Callaghan’s first 10 starts he averaged just under 0-3 per match, scoring 0-13 less than Clifford has amounted (3-19 to 3-32).

The 20 year-old Kerry sharpshooter has only scored 0-5 within the 21 metre line. He has scored 0-6 to the left of the D and the same amount to the right of it. He’s scored 0-3 off his weaker right foot and fisted two points.

His ability to play off both sides allows him to shoot on the turn, or peel off into space when stood up by a defender. He will very rarely attempt to take his man on outright, and if a defender rushes him he can step to either side and finish with ease off his left or right.

The All Star corner forward is at his best when the game is stretched, when he’s left isolated with his marker, with space to play with.

O’Callaghan is a much more direct player, who will take his man on at every opportunity to get himself into the scoring zone. He stays closer to goals, where he carries his biggest threat and is also a long ball outlet.

Dublin have bagged two goals off long frees into him. While eight of his 13 scores have been kicked from inside the 21 metre line, and three more have been slotted along the line itself.

He scored one in the centre of the D, and another from the same distance but to the right of the D. That was the only score not taken in the heart of the scoring zone.

In Dublin’s semi-final win against Mayo, James Horan identified O’Callaghan as the main threat and detailed former Footballer of the Year Lee Keegan to track him. Marking 13 different attackers in the seven matches previous, Keegan had only conceded 0-4. He conceded two goals against Dublin.

O’Callaghan was involved in five goal chances in all and gave the second last pass for his team’s third goal after finding the near corner for the first two.

With 13 possessions he ran at his man on 11 occasions. His pace, power and sharp reactions make him a unique talent. And one who comes to life when the game opens up and Dublin press the opposition rather than control proceedings via possession.

A hurler’s instinct is to go out by his man first time and the two time club All-Ireland hurling winner is terrifying defenders by transferring this mindset to the big ball game.

Trailing by two points at the change of ends against Mayo, Dublin blitzed Mayo in 12 second half minutes. Outscoring them 2-6 to 1-0. O’Callaghan scored or assisted 2-2 of that.

Dublin have won all but four of the 28 quarters in their seven championship matches. They lost one in their win against Tyrone in Omagh, when both Jim Gavin and Mickey Harte fielded dummy teams. Mayo won the first two quarters against them and Cork won the third quarter of their Super 8s encounter.

Along with their win against Mayo, that match was the only other test Dublin have faced this summer. Cork were unlucky to be trailing 2-9 to 0-9 after a very competitive first half, and won the next quarter 1-3 to 0-4. In that end-to-end first half O’Callaghan kicked 0-3, assisted another point and was involved in three goal chances, when a lot of his teammates were struggling outside of the usual controlled terms.

In all seven of Dublin’s matches they have had one dominant quarter in which they’ve heavily outscored their opposition. By either six points or nine.

Cork were seen off 3-5 to 0-5 in the final 17 and a half minutes, and Dublin killed off any chance of an upset against Roscommon winning the first quarter 1-6 to 0-3.

Against Tyrone the most damage was also done in the final quarter which Dublin won 1-4 to 0-1, while Mayo were outscored by nine points in that decisive third quarter.

The reigning champions have won the second half of every match by seven points or more, with O’Callaghan scoring 3-3 in total after the interval.

So Dublin are playing with control and precision but twisting the knife in scoring bursts of chaos. Headed by their shaven headed goal machine.

Kerry have their own man, popping up all over the forward line causing equal havoc. He’s scored 0-10 in the first half and 0-7 in the second half of his five matches. Kerry’s periods of dominance are far less patterned than Dublin’s, and Clifford will punish space with the same ruthlessness whatever stage it appears in.

The two most exciting players in the game - David Clifford and Con O’Callaghan. With two very different approaches. When Sunday’s All-Ireland final inevitably opens up, expect a fascinating shootout.