Despite never threatening to overturn Dublin, Pete McGrath’s side never gave in

Fermanagh’s Seán Quigley pushes Dublin goalkeeper Stephen Cluxton into the net with the ball, which resulted in a goal being awarded to the Ulster side during the All-Ireland SFC quarter-final at Croke Park. Photograph: Morgan Treacy/Inpho

By the numbers, this was quite a contest. By any other metric, it was business as usual. Dublin rolled on through another All-Ireland quarter-final looking serene and graceful as a fleet of Bentleys, Fermanagh just another bug squashed on their windscreen.

That Pete McGrath’s side got within eight points by the end was a tribute to their sense of self-worth. But don’t imagine it was anything Dublin need to worry about.

For the second game in a row, a team that was thoroughly outclassed by Jim Gavin’s side managed to leave Croke Park with some measure of respectability. For Westmeath’s meagre concession of 2-13 the last day (Dublin’s lowest score in the Leinster Championship under Gavin), see Fermanagh’s final total of 2-15, the second highest score any county has put up against them in his time.

It’s something and it’s nothing. Mostly, it’s indicative of a Fermanagh side that decided to enjoy themselves in the closing 15 minutes with the game long since having disappeared off into the distance.

From the 58th minute to the end, they outscored Dublin by 2-5 to 1-3. But it would harsh to the point of perversity to come down overly hard on Gavin’s side. By the final quarter, he had withdrawn Ciarán Kilkenny, Diarmuid Connolly, Jonny Cooper – three of Dublin’s best performers alongside Bernard Brogan.

If the result had been the subject of mystery, all three would surely have stayed on the pitch. Add in a couple of freak Fermanagh goals and the slight sense of mission drift as the game petered out can be forgiven.

The reality is that Dublin were awesome at times here. They played some of the slickest and most intelligent football of this or any season, showcasing in the first 45 minutes especially the moving parts that make them such a force. On yesterday’s evidence, there won’t be much to complain about if the summer is to end with them and Kerry facing off in an All-Ireland final.

A tip of the hat to Fermanagh though. After the mincing Kildare had taken in the first game, there wasn’t so much a fear as an expectation that McGrath’s side would suffer a similar fate. To their credit, they didn’t submit to it anywhere near as readily as Kildare had. Seán Quigley, Ryan McCluskey and Barry Mulrone all left their mark on Croke Park, with Quigley in particular enjoying his afternoon annoying the Hill. 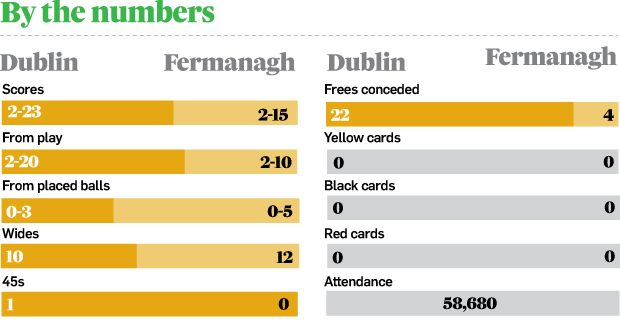 But in the final reckoning, he illustrated the difference between the sides. Quigley is a fine footballer and will most likely end the year with an All Star nomination. He scored eight points here, four of them terrific efforts from play. But could you see him in the Dublin panel?

The chasm in ability, physique and game intelligence between Fermanagh’s players and Dublin’s yesterday was absolute. McGrath’s side started tigerishly, throwing themselves into tackles and grabbing breaks off the floor in the early minutes. But when faced with scoring opportunities, they either took them badly or tried shots that were never on.

They got within shooting distance four times in the opening six minutes but drove three wides and dropped one ball into Stephen Cluxton’s chest. Up the other end, Paddy Andrews popped Dublin’s first scoring chance between the posts. Simple.

And so it went. Dublin were 0-4 to 0-1 ahead when Brogan slotted home their first goal of the day on 13 minutes. It was one of those goals where Brogan played front-man but the song-writing credit belonged to someone else, in this case Jack McCaffrey.

The wing-back burst into a tackle to break up a Fermanagh attack behind his own 45, scorched the earth playing a couple of one-twos along the way, before arrowing a 50-metre ball onto Brogan’s chest. It was a glorious intercession from McCaffrey and Brogan gave it the finish it deserved.

With Kilkenny, Connolly, Brogan and Dean Rock all on form, Dublin led 1-13 to 0-6 half-time.

But unlike the Leinster teams the Dublin have spent their summer thumping, Fermanagh were determined to do justice to the army of supporters that had come up to Croke Park. They beavered away, never remotely threatening Dublin’s lead but carrying themselves with honour.

Though Rock, Andrews and Brogan put Dublin out the gap in the third quarter, their 1-20 to 0-10 lead only seemed to spur Fermanagh to really start partying it up. Quigley had clearly decided he was going to shoot on sight and after he landed a couple, substitute Conall Jones did the same.

As time ran down, Quigley riled up the Hill by bundling Stephen Cluxton across the line for a goal that should never have stood and Tomás Corrigan got in for a tap-in after a slapstick mix-up in the Dublin defence. It was great old gas altogether.

But none of it made the slightest impact on the result.

3 Darragh Ó Sé: Galway’s defeat at the death to Monaghan is shocking and unforgivable

5 Jon Rahm: ‘The hardest part was not being able to see my young son’