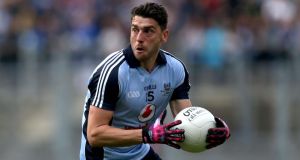 While Bernard Brogan is unlikely to start against Mayo in tomorrow’s Division One game at Croke Park, Dublin manager Jim Gavin expects the fit again full forward to feature at some stage. Photograph: Ryan Byrne/Inpho

Bit by bit, Dublin’s best side is starting to become available to Jim Gavin, who yesterday raised the prospect of Bernard Brogan facing Mayo on Saturday night.

Although Dublin have used 31 players in the league so far – the most of any team in Division One – a combination of injuries and club commitments has meant that a third of their starting line-up from the All Ireland final has yet to appear this spring.

Brogan is one of them and while it’s unlikely he will start tomorrow, Gavin is hopeful he will play some part.

“Bernard trained during the week and put a very good session in. We’ll see how he is tomorrow with the medical team and we’ll make that call. But we hope to have him playing this weekend.

“It’s just taking a cautious approach with all our players that are injured. We’ve 11 weeks to go until championship so it’s a case of getting everyone fit and right, to make sure the players are healthy.

Full complement
“That’s been the case with a lot of players. Paul Flynn, Rory O’Carroll . . . James McCarthy had a stomach upset, so rather than risk his health, we just pushed him away and let him rest. We’re slowly returning to the full complement. Denis Bastick should be another three weeks before he’s back. Dean Rock, another six weeks, maybe four. So things are coming along nicely.”

Brogan had been aiming at either the Tyrone or Kildare games at the beginning of this month to make his first outing of the season but Gavin isn’t worried it has taken him a little longer. He has been back kicking a ball in training in the past couple of weeks and the next step is to get him some game time.

“He has had milestones that he had had to meet and he has met them along the way,” Gavin explains, “now he is back on the field and for a player of his technical skills it won’t take him long to back into the groove.

In that respect, you’d imagine Dublin could do with extending their league campaign beyond the two remaining games against Mayo and Tyrone. Defeats to Derry and Cork have left them in fourth place in the table and were Mayo to leave Croke Park with a win, Dublin’s chances of reaching the semi-finals would take a severe denting.

Gavin doesn’t buy the argument, however, or at least he won’t be accepting failure to make the knock-out stages as an excuse for his panel not being up to speed come summer.

“We are taking each game on its merits, which we did last year. We are looking for consistency and if we get that results will come with that.

“We planned our schedule on seven games in the league and anything outside of that is a bonus. If we don’t get that we’ll have other games either externally or internally.

“There will be plenty of chances for players to get good competitive game time, either externally or internally.”