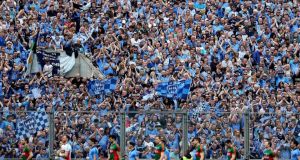 Marching on Croke Park: Mayo will be hoping to exploit the lack of self-confidence which seems to have affected Dublin’s players this year. Photograph: Ryan Byrne/Inpho

The biggest weekend in the history of the GAA gets under way this evening with the GAA football All-Ireland semi-final replay between Dublin and Mayo. Since referee Joe McQuillan blew the final whistle last Sunday, this contest has sucked most of the oxygen out of the air in what would have been the run-up to the weekend’s hurling final.

That’s not too frustrating for the GAA in that they have two full houses in Croke Park on successive days, but a week that would normally be filled with soft-focus coverage of the hurling has instead been filled with more discordant noises, concerning the difficulties in distributing tickets on a six-day turnaround and more intrusively the constant drum-roll of the association’s many-layered disciplinary processes.

This reached its finale on Friday night when Diarmuid Connolly took the challenge to his one-match suspension before the Disputes Resolution Authority, the GAA’s independent tribunal. Why, it’s hard to say apart from the understandable perception that the system is like the Lotto and you never know when your numbers might come up.

That hearing was still going on late last night, less than 24 hours before throw-in.

Given, however, that Connolly had already been to the CHC and CAC, both chaired by former DRA secretaries, the chance of loopholes would have appeared as remote as the prospect of tickets, the remaining few of which sold out online shortly after going up late yesterday afternoon.

There have been only six days between draw and replay and you would have to question the wisdom maintaining such a relentless focus on any player – even one as important as Connolly – all week with the resulting distraction and disruption to preparations as well as the sense of unease this apparent desperation not to take the field without him must transmit to other panellists.

This has become crisis time for Dublin. A year ago they were blindsided by Donegal in an All-Ireland semi-final and failed to limit the damage tactically. More worryingly, a fault-line in the team’s self-confidence and leadership reserves became apparent.

An intense year has been spent addressing the tactical shortcomings but there has been frustration at the fact that nothing likely to happen in the league or in Leinster was ever going to give them an accurate read on where they were and how well they had regrouped.

Mayo were the first touchstone of Dublin’s hoped-for improvement and if on the one hand the Leinster champions’ upper range looked well beyond that of their opponents, they hit those notes only sporadically and, astonishingly, at the first sign of adversity they looked as panic-stricken and rudderless as at any stage against Donegal.

There have been issues with leading players. Stephen Cluxton’s meltdown in the closing stages followed on a jittery conclusion to the Fermanagh quarter-final and he faces a testing time this evening, as Mayo will have weighed up the rewards of pressurising his kick-outs.

In general Dublin looked nervy. Cian O’Sullivan’s usually assured presence in defence was replaced by something more anxious, which left him lucky not to have been black-carded or indeed sent off had a first-half foul been met with a yellow card.

It has to be acknowledged that the defence was missing its most authoritative figure in Rory O’Carroll, who left the field after a couple of minutes with facial lacerations. His return has been hinted at but there’s no guarantee he’ll be recovered.

So Dublin definitely have room for improvement, which is a good benchmark for replays, but ideally not so much improvement. After a decent opening they flagged and allowed the opposition into the match.

Jack McCaffrey’s stunning pace and ability to counter-attack yielded 1-1 but he wasn’t brought into play as often as possible despite making runs. That must be better co-ordinated.

The problem for Gavin’s team is that Mayo also need a fair bit of upside on last week’s display. The defence was taken apart at times and shipped a disastrous sequence of scores that should have sunk them. They’ll be more confident facing a weakened attack.

The keystone of the team’s improved design, Aidan O’Shea at full forward, didn’t have the transformative impact hoped for even against an improvised defence. The late deliverance also involved players off the bench who haven’t always been guaranteed performers – although Andy Moran’s appetite for Dublin in Croke Park appears as keen as ever.

Mayo’s centrefield was superior to Dublin’s at winning contested ball but the distribution of Tom Parsons and Séamus O’Shea didn’t always maximise the advantage. The one area where they couldn’t do much better was place kicking, an exhibition of which was given by Cillian O’Connor including that penalty.

This also highlights something Dublin simply have to improve: their defensive discipline. That any place-kicker, even one as accomplished as O’Connor, could shoot 1-8 as a result of fouling was an indictment of the defending, considering the equivalent concession by Mayo was just 1-1, allowing that Cluxton should have added to that in the second half.

Aside from the tactical considerations and the room for individual improvement, the most worrying aspect for Dublin was the trail of blood they left in the water. Two years ago if they had gone seven ahead of opponents in the 62nd minute you could bet your house on a double-digit beating.

They don’t inspire that kind of fear any more and you sense they know it. Right now, the Dublin project, which looked set to dominate football, is in serious trouble.