Member of the legendary team that broke through in 1955 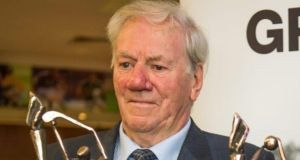 Ned Wheeler receiving his lifetime achievement award from the GPA

The death has taken place of Ned Wheeler, the great Wexford hurler, at the age of 87. A native of Laois, he lived from his teenage years in Wexford and was a member of the celebrated teams of the 1950s and 1960s, winning All-Irelands in 1955, 1956 and 1960, first at centre forward and then, centrefield.

He also won seven Leinster and two NHL medals in a career that stretched from the late 1940s until 1965. His passing means that goalkeeper Art Foley is the only surviving member of the now legendary team that broke through in 1955.

His playing career lasted until 1968 with his club, Faythe Harriers.

GAA president John Horan paid tribute and expressed the sympathies of the association to his family and friends: “Ned Wheeler will forever be revered as an icon by the generation of hurling fans who revelled in his exploits for Wexford”.

Gonzaga shock Blackrock for historic Leinster Senior Cup win 18:20
Whitehall VEC pitches vandalised by ‘teenagers on quads’ 18:18
Clare ease into action with 16-point thrashing of Carlow 18:03
Kilkenny give an early glimpse of their power to see off Dublin 17:53
Five-star Mark Wood sets England towards Wanderers win 17:45
Here is your handy guide to sport on television this week