A decade on, the move to Leinster has been productive for Galway hurling 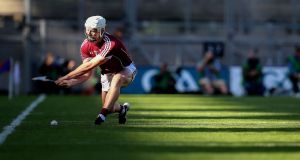 Joe Canning: has graced the All-Ireland final on four occasions since Galway entered the Leinster championship, with the Tribesmen triumphant in 2017. Photograph: Tommy Dickson/Inpho

It’s only when you write this stuff down that you realise the words are laughing back at you.

On April 20th 2008, Galway played out a riotous league final against Tipperary in Limerick. It ended 3-16 to 3-14 and though Tipp had the best of it for the most of it, the game contained plenty to sustain the hurling people of the west.

It was Joe Canning’s second senior appearance in a Galway jersey and he marked it with his first goal, a solo effort that looked impossible at every stage until the last one.

After that, just the dark. Galway had a 10-week break until their next game, a 6-21 to 1-10 waterboarding of Antrim on June 28th. They put 1-26 on Laois a week later and then sat for a fortnight before they faced Cork. On July 19th, they faced their first serious opposition of the championship and they did it without a safety net. Despite Canning putting in an immortal display in scoring 2-6, their first test was their last test.

In Galway, it was a massive break with tradition

For most contender counties, the summer went through a sieve. Gravity had its way with everyone eventually but it was a gradual thing for the Munster and Leinster teams. For Galway, it was a dance around an open plughole. All it took was a kick of old Cork obduracy and whoosh, Galway were gone.

It was a mad way to run things. Not as mad as the old, old ways when Galway would join in with the championship just as the rest of the field was jumping the second last – but still lacking all sense. Things had to change.

So it was that 10 years ago last weekend, Galway moved into Leinster. Their first day out was a low-key trouncing of Laois, a mere six weeks after their final game in the 2009 league. The best anyone could figure it, that was the first time Galway had ever played championship hurling in May. More significantly, it set up their first Leinster championship clash with Kilkenny, three weeks later in Tullamore.

That Galway team was managed by John McIntyre, in his first season after replacing Ger Loughnane. It was Kilkenny’s first championship outing since their museum display in the previous year’s All-Ireland final. All of it went into the mix as McIntyre laid the path in front of his charges. Talk about stepping into the dark. Ain’t no unknown like a late-2000s Kilkenny unknown.

“It was a huge deal for Galway to go to Leinster in the first place,” says McIntyre. “It was something that had been resisted by a lot of, we’ll say, conservative-thinking individuals around the county.

“It was a big leap for Galway and rightly or wrongly, the perception locally at the time was that they were being invited in to prop up an uncompetitive Leinster championship rather than because of any goodwill towards Galway hurling or any urge to give Galway more competitive games. There would have been suspicion around that in Galway, certainly.

“I remember when I started in the Connacht Tribune way back in December 1980 and for years and years subsequently, you’d be waiting until August for Galway to swing into championship action. Some years there was a nominal quarter-final against third-rate opposition but more often than not, Galway were pitched straight into an All-Ireland semi-final. Plenty of other counties saw that as such an advantage even though the record books would have suggested otherwise.

“So it had an effect on the mindset of the players, who had been used to coming into the championship later and later. On a personal level, I didn’t find it as transformative as the players and other stakeholders in Galway because I had been in for two stints with Offaly previously. So I was conditioned to teams setting off on the championship trail in May and early June. So to me, it was just normal.

“But in Galway, it was a massive break with tradition. In fairness to the management team I worked with and the players, the newness of it was a challenge that they were really up for. Obviously it made it more difficult, on the face of it, to win an All-Ireland. But the bottom line was that it was the lesser of two evils. At that stage, Galway had no All-Ireland since 1988 so there was an openness to try something different.”

That first Kilkenny game was a blast. Tullamore was in Saturday night festival mode and Galway did themselves plenty of justice. Canning hit 2-9 across the evening, starting with an early goal. They even led by five shortly after the break, wobbling the knees of Brian Cody’s side and making them take a standing count.

Kilkenny brushed it off, of course, and came back with 10 points on the bounce. By the end, they had enough in the bank to run out winners by 2-20 to 3-13. Galway had given them plenty of it, though – go back through the records and it washes out as the second-closest game in Kilkenny’s four-in-a-row. At a stroke, the move to Leinster had its justification.

“It was different,” mused Cody afterwards.

“Joe Canning turned JJ Delaney early on and scored a great goal,” McIntyre recalls now. “We nearly had a second one only Tommy Walsh carried out a professional foul on Andy Smith. We were in a good place coming up to half-time but conceded two very sloppy goals. Then, at the start of the second half, we regrouped and Niall Healy got a goal and we went five points up.

“I do believe we had Kilkenny really rattled. There was a fervour around the ground. But then, at pitchside, I really saw first-hand why Kilkenny were on their way to four in a row. They reeled off 10 points in a row and Eoin Larkin was the man who did most of the damage.

“We had a bit of a short puck strategy on the evening and we were trying to take Kilkenny out of their comfort zone and move them around a bit. But they were just too good. We went down to, an honourable enough, four-point defeat but my gut instinct afterwards was that we had left a golden opportunity behind us because of those sloppy goals we had conceded before half-time.”

In the decade since, the wheel has gradually turned. Galway and Kilkenny have faced off on 13 occasions. Kilkenny have won seven, Galway have won three and three have been drawn. Micheál Donoghue’s side head to Nowlan Park tomorrow on a three-game unbeaten run against Kilkenny – the longest such streak on the Galway side of the fixture in the history of the competition.

The conservative types McIntyre speaks of weren’t all wrong about Galway being brought in to prop up an uncompetitive province. But the move has done Galway plenty of service too.

“This needed to happen for Galway,” says Damien Coleman, Connacht’s games development officer, who filled the same role for Galway when the move was made back in 2009. “The very essence of games development is games and fixtures. And the Tier One counties at our level need a meaningful games programme.

There’s no pleasing some GAA people.

“Adult seniors get that in Leinster and gone are the days when you arrive into Croke Park in August wondering what you have. Thank God those days are over. The Leinster Championship was the right fit and we’re absolutely delighted now that our under-20s have followed suit. What are the needs of players? Fixtures and games at meaningful ability level. The Leinster championship has offered that. Galway were only ever going to develop from it.”

And develop they have. In 2009, Galway had been in to two All-Ireland finals in each of the previous two decades. In the 10 years since, they’ve been to four, including their day of days in 2017. They’ve amassed three Leinster titles, including the last two back-to-back. Any downside has been hard to find.

The various refits and refurbishments over the years has seen Offaly and Laois squeezed out but nobody is arguing seriously that either county have Galway to blame for where they are. Wexford and Dublin both opposed the move initially but both revel in joining battle now. Kilkenny aren’t what they were but then again, who is?

“Kilkenny were one of the more enthusiastic counties about Galway coming into Leinster,” says McIntyre. “The likes of Wexford and Offaly saw it as a threat and felt it would make life more difficult for them. But Kilkenny were okay with Galway coming east. They just rolled up their sleeves and got on with it, even when Galway beat them a few times over the years. They don’t do self-pity in Kilkenny.

“Obviously, it didn’t do Galway any harm. It made them competitive. My three years ended in All-Ireland quarter-final defeats and two of them were heart-breakers. But I don’t think it did any harm from a competitiveness standpoint. I would say it definitely helped more than it hindered.

“There was though a lingering begrudgery in Galway over it happening at all because Galway were getting no home matches in the province. That was around the county right up until the round-robin came in. It was kind of, ‘Well they wanted us in the first place to help the Leinster championship but then on the other hand they wouldn’t treat us as an equal by giving us any home games’. And I fully understand that emotion.

“So the pluses have outweighed the minuses, definitely. Although to be honest, there are some people in east Galway who would rather travel to Tullamore than to drive into Salthill for a game!”

Proving, once and for good, that there’s no pleasing some GAA people.