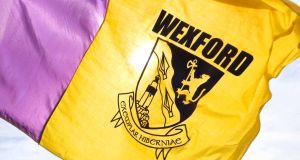 The death has taken place of Ned Wheeler, the great Wexford hurler, at the age of 87.

He also won seven Leinster and two NHL medals in a career that stretched from the late 1940s until 1965. His passing means that goalkeeper Art Foley is the only surviving member of the now legendary team that broke through in 1955.

They were central to the golden age of hurling in the 1950s with their strength, athleticism and charisma, attracting record crowds for All-Ireland finals, both against Cork, in 1954 (84,856) and 1956 (83,096) – which to this day remain unequalled.

His playing career lasted until 1968 with his club, Faythe Harriers.

Friend and team-mate Billy Rackard recalled Ned Wheeler’s arrival on the team in his memoir ‘No Hurling at the Dairy Door’.

“A six-foot-two-inch blond Viking, genetically traced to the great Delaney footballers of Laois, who had already signalled his prowess and intentions as one of the most outstanding minors ever seen in a Wexford jersey. Fourteen years later this midfield Titan still had the ability to bring the crowd to their feet as he lashed first time at any angle, rocketing the ball almost the length of the park.”

GAA president John Horan paid tribute and expressed the sympathies of the Association to his family and friends:

“Ned Wheeler will forever be revered as an icon by the generation of hurling fans who revelled in his exploits for Wexford.”