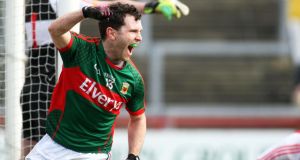 Derry manager Brian McIver blasted the performance of referee Ciarán Branagan after his side’s defeat by Mayo left their survival hopes in tatters.

McIver, who also complained bitterly about the performance of David Coldrick in his side’s derby with Tyrone last weekend, was visibly annoyed after the game.

“Disgusted, I’m disgusted. Not taking anything away from Mayo but they got a jammy goal and every decision going,” fumed the Oak Leaf boss.

His side lost James Kielt to a black card for dissent in the final few moments, not long after Mayo’s Mark Ronaldson had been sent to the line for pulling down Kevin Johnston.

“The James Kielt one at the end, we get men around and they get a free and we get a black card. They do the same with us and it’s a free out for overcarrying. How do you work that one out? Time and time again, all day.”

Asked if he had sought to speak to the referee after the game, McIver replied: “You mightn’t even talk to them. You’re looking at the inner sanctuary.”

The frustration was visible on the Derry players during the second half as they complained time and again at the Down official’s decisions, with Mark Lynch vocal in querying how Barry Moran had escaped a card after chopping him down as he bore down on goal.

Derry had produced their best display of the campaign to date but were ultimately beaten by Mikey Sweeney’s last-minute goal. Brian Óg McGilligan’s fisted effort seconds later proved only a consolation.

Mayo’s transition from defence to attack in the first half was fluid and sharp. They posted Aidan O’Shea inside again in the first half and he proved an able ball-winner, and notched two scores from play for himself before the break.

Derry’s luck was absent seconds before the interval. The Oak Leafers’ attacking performance was vastly improved from previous performances, and they worked an opening for Sean Leo McGoldrick. His left-footed effort fell short and Michael McIver got his fist to it at the far post, but his effort came back off the bar.

That ensured that Mayo led at the break, 1-7 to 0-6, but Derry fought gamely and produced their best display of the league.

The home side built up a head of steam, led by the introduction of Kielt, and they hit four points on the spin to pull themselves level at 0-13 to 1-10.

But the next two scores crucially went to Pat Holmes and Noel Connelly’s side as Kevin McLoughlin’s searing pace took him away to rifled over before he pointed a free.

Sweeney’s goal proved enough to keep them level with Cork and set them up for a Dublin side that need points just as much as Derry did.