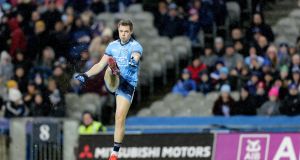 Dublin’s Dean Rock has spoken about how he had to ease up on free-taking practice as a younger player. Rock, who turned 30 this year, will almost certainly become the county’s top league and championship scorer in history when the intercounty season resumes in October.

In an interview with Marie Crowe as part of the McSport Motivation series, the prolific forward spoke about his free-taking practice during lockdown.

“Over the years, I developed my own habits. As a kid I probably would have kicked 200 balls a session but I started to realise that my hips and groins and knees weren’t really going to be able to sustain that for much longer. So I had to change my own training methods and now it’s just 35 or 40 kicks a session.

“Every kick though would be really purposeful. I’d put myself into match-type situations, trying to execute the kick as best I can rather than kicking too many balls under fatigue. I’ve got to get myself ready for the next session. Once I put myself into that routine 30 or 40 times, I walk away with some learning. Less is more for me these days.”

In the past year Rock has moved within two points of long-time Dublin record scorer Jimmy Keaveney, whose 30-402 has stood at the top of the scoring lists for over 40 years.

This lead of 0-31 at the end of last season was seriously eroded in the five matches of the 2020 league played in January and February in which time Rock scored 2-23.

One of the players he overtook on the all-time scoring table was his father Barney, who now sits in fifth place but is still involved in helping him kick his prolific free-taking technique ticking over.

“I still involve my dad,” he said. “It’s something we can bond over and over the past couple of weeks he’s come up to Malahide Castle since the lockdown restrictions on travel have been eased.

“The tables have turned. For years I was just there behind the posts collecting the balls for him. Now it’s his turn to run – or stumble – across to get them for me. He gives me advice to this day. I don’t know it all and it’s certainly something that I welcome.”

1 Ken Early: PSG would be sensible final move for Ronaldo
2 A new breed of superstar - Collin Morikawa wins US PGA
3 The Offload: Joe Schmidt the influencer is due a second act
4 Ronnie O’Sullivan: snooker’s next generation are ‘so bad’
5 Champions League quarter-finals: game by game verdicts
Real news has value SUBSCRIBE