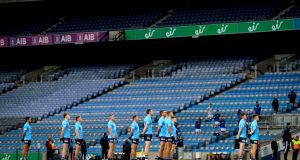 One of the greatest players of all time. His appetite seems to be the same as ever. Everything flows from him. Hasn’t had many saves to make but his standards haven’t dropped one iota.

One of the best corner-backs in the game, has developed and improved all the way through his career. Aggressive in the tackle, he’s the stickiest marker Dublin have.

One of the few Dublin defenders that I think can be got at. Stylish on the ball and very good at joining attacks but not the most dependable shut-down marker. Mayo might test him.

Every county would love a Jonny Cooper. Mad for battle, never gives an inch, plays on the edge at all times. Keeps on top of his teammates so that they have no option but to keep driving on.

Keeps overcoming expectations. To the eye, he’s one of the Dublin defenders you could maybe target but he hasn’t been found out yet. If the right possession comes in, the Mayo full-forward line will test him.

A different centre-back to the Cian O’Sullivan role of old. In there as a pure stopper. Hardy, raw and physical, he’s not afraid to go through fellas. Sacrifices his own game for the betterment of the team.

Has come in to a dream scenario, joining an experienced team and given his head to play it as he sees it. Reminds me of Kyle Hayes bursting forward for the Limerick hurlers.

The top midfielder in the country. Massively high skill level, unflappable attitude, incredible engine to get up and down the field. Scores more than his fair share as well.

Dublin’s Rolls-Royce. At this stage, he’s the outfield leader of the team. Every Dublin player looks up to him and depends on him. On the rare occasion they get in trouble, he’s the first to step up.

Great worker, up and down the field. A great man to pop up on the end of a passing move to palm home a goal, which tells you a lot about the way he reads the game. Ruthless.

The way he’s playing at the minute, he seems almost unmarkable. Pace, physicality and a high level of accuracy off both feet when he’s shooting. His decision-making is superb. Keeps getting better.

Has slotted in without breaking stride. Playing very well, albeit there hasn’t been a big test yet. Has forced the occasional shot through inexperience. Interesting to see how he handles Mayo’s higher tempo.

A great tackler for an inside forward but his shooting has let him down at times. Has the look of a lad who isn’t sure of his place so he tries a bit too hard. Some achievement to keep Mannion and Costello off the team.

The best forward in the game by a good distance. No weakness in his game. Gets the most out of every attack - if there’s a goal on, Con will find it. Tackles like a demon, into the bargain.

One of the Dublin players who has got the very best out of himself in his career. His free-taking is so dependable that it nearly doesn’t matter that a good tight marker can keep him quiet from play.