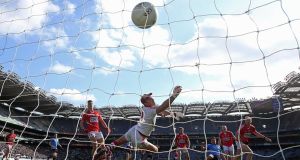 So maybe this is the way it’s going to be: A summer of watching Dublin find new and interesting ways to back themselves into corners, all as mere pretext to great reveal after great reveal.

Tie their hands, bind their ankles, check the padlock to make sure it’s secure – then sit back and watch them wriggle free.

It shouldn’t have been a final whistle that sounded here yesterday as they alakazamed their way to a league final date with Derry in a couple of weeks. No, this one deserved nothing less than a Ta-Dah! This was standing ovation stuff for the 28,903 here to see it, a routine that called for flowers to be chucked from the seats and boxes. But they won’t mind having to make do with the bodhráns and bowsies from the Hill. They won’t mind it at all.

Let’s get the maths out of the way before we run the rule over the magic. When Daniel Goulding drilled the second point of the second half on 37 minutes, Cork went 2-11 to 0-7 ahead. Not only were they worth every inch of their lead, Dublin’s day was more than justly reflected in the weight of their deficit.


Slow starters
A couple of Cork goals inside the opening eight minutes had dropped an anvil on Dublin’s head and the way they started the second half did nothing to suggest the fog might clear anytime soon.

And yet it did. They went from being 10 points down three minutes after the break to winning by seven in the end. They outscored Cork in the second half by 2-13 to 0-4. Cork scored one point in the closing half hour; Dublin scored 1-13. It doesn’t make sense. But then, the David Copperfields of this world don’t have to. All that matters is that by the end, you’re on your feet calling for more.

“They demonstrate [character] day in and day out when we are with them,” said Jim Gavin afterwards. “We would have seen that mental resolve last year as well in a lot of the games, so it is pleasing to see it is still there and that they can tap into it. But on a technical level and a tactical level, the lack of consistency is an area that we really need to work on.”

It’s been the story of their league. First night out against Kerry, they scored five of the last six points to win by one. Second day against Westmeath, they trailed with 15 to go before scoring seven of the last nine. Against Mayo, it was two goals in injury-time to thieve a draw. Against Tyrone, it was Diarmuid Connolly’s point from the ends of the earth with the clock running dead. Here, it was a 17-point turnaround inside a single half.

They don’t know when they’re beaten. The flip side of which, of course, is that their opposition can’t know when they’ve won. Cork were fluid and accurate in a conscientious kind of way in that first half, taking care with their shot selection and profiting from their precision. They pushed right up on Stephen Cluxton’s kick-outs and often had the Dublin fullback all of a flutter.

Brian Hurley scored five points from play before the break, Colm O’Neill continued his comeback with another 1-1 to bring his total for a league in which he hasn’t once played a full game to 3-10. Dublin were spraying wides and only Alan Brogan of their big guns was finding a way to insinuate himself into the game. Cork looked like they wanted to get to a league final. Dublin looked like the very thought offended them.

“I thought we played very, very well in the first half,” said Brian Cuthbert. “I thought we controlled the game very well. Everything we set out to do seemed to be working ad going in at half-time we seemed to be in a very good place. The score line would have suggested the same but it was more than that, I felt we were controlling the tempo of the game which is very important against Dublin.”

They used to say that often when you’re watching Paul Daniels, you really should be keeping an eye on Debbie McGee. When Cork went those 10 points ahead early in the second half, the last place they would have thought trouble might brew would have been in the hands of corner-back Philly McMahon.


Come-back kid
Yet it was his lung-burst scamper into the Dublin forward line that started the comeback, a wild shot cannoning down off the upright into the hands of Michael Darragh Macauley for the 2013 Footballer of the Year to bulge the net.

Dublin, now only seven behind, got Bernard Brogan on to the pitch for his first involvement since the All-Ireland final and all of a sudden they were a force again.

For all their rescue acts, at no stage during this league have Dublin looked like the team that swept to the All-Ireland. They did now.

Macauley started to lord midfield, Connolly and Paul Flynn oozed physicality and class. Eoghan O’Gara was untouchable inside, Brogan likewise. McMahon kept sallying forward from the back, sometimes with Jonny Cooper in tow. They reeled off point after point and left Cork choking in their dust.

“Dublin were down 10 points at one stage there and then we made a mistake,” lamented Cuthbert. “We gave them a goal, gave them momentum and I would have felt after that we couldn’t get the ball past midfield.

“We were kicking the ball back out to them, they were breaking it back forward and we were not picking up the breaks.

“It was wave after wave of attack, they had momentum, they could smell the chance that they had.”

Not for the first time, Jim Gavin’s side pursued that chance with extreme prejudice. Can’t imagine it will be the last, either.

What fun it is to watch them pick the padlock and make good their escape.

Tiger Woods and Peyton Manning hold their nerve in $20m Covid-19 charity match 07:10
Argentina rugby great Hugo Porta continues to give back to his beloved game 07:00
George Kruis leaves the door open as he prepares to depart Saracens 06:35
TV View: Not every day a Tesco delivery disrupts a Bundesliga broadcast 06:30
Ken Early: Liverpool fans, Bamber Gascoigne and a close shave in Istanbul 06:00
Crossword Get access to over 6,000 interactive crosswords