Conor McManus’s brilliance is blessing and curse for Monaghan 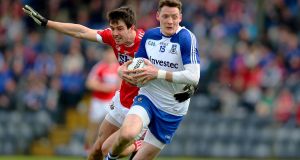 Conor McManus’s 2-37 makes him the top scorer in the division by a distance – nine points ahead of Ciarán Murtagh of Roscommon. Photograph: Donall Farmer/Inpho

With five minutes to go against Dublin back in February, Conor McManus took off on another wheeling, hitch-kicking, looping run down in front of Hill 16. He had been laying waste to the Dublin full-back line all night and so nobody was inclined to take him by the ear as he let go a hero shot from out under the Cusack Stand, falling away as he hit it. Up to that point, McManus had taken 11 shots and scored 11 points and a minutes later he would nail a free to put Monaghan ahead. He was well entitled to his optimism.

The gods only dish out so many miracles at a time though and McManus’s shot didn’t trouble the posts on this occasion. Up in the press box, we did something we don’t usually do for a wide – we noted down the time. It seemed like the right thing to do, treating a wide as a newsworthy event. That’s how untouchable McManus was on the night.

For a small county like Monaghan, McManus represents by far their greatest asset and their most glaring weakness. One bullet, no matter how lethal, can only do so much damage. For all that he left the All-Ireland champions’ defence skinned alive that night, Monaghan still lost the game. They put up a total of 0-16, McManus was responsible for 0-12. His last free put them ahead on 67 minutes but there was still time for Cormac Costello and Bernard Brogan to fashion an equaliser and a winner out of somewhere.

It was a similar story in the following round against Mayo. Monaghan put up 1-12, with McManus on the hook for 1-8 of it. They were at home against a side that hadn’t yet won a game in the league and they were level with five minutes to go – and still they couldn’t get it done. Robbie Hennelly kicked two late, long frees to earn Mayo the points.

Those back-to-back defeats were probably Monaghan’s best performances of the league but they’re also the reason Malachy O’Rourke’s side are in grave danger of relegation. With both games in the melting pot, the only other Monaghan player to score after half-time either day was Rory Beggan, who chipped in with a 45. Otherwise, McManus was the only second-half scorer in two successive games.

The stats and percentages make atrocious reading for the Ulster champions. In six league games so far, he is responsible for almost exactly half of Monaghan’s scores. His 2-37 makes him the top scorer in the division by a distance – nine points ahead of Roscommon’s Ciarán Murtagh and 14 ahead of Michael Murphy.

But it’s in the distance between him and the rest of the Monaghan panel that you really see O’Rourke’s predicament in stark terms. McManus has scored 48.8 per cent of Monaghan’s tallies so far but the drop-off to the next most frequent contributor is enormous – goalkeeper Beggan has scored 0-7, or 7.9 per cent. The disparity of 40.9 per cent is completely untenable.

McManus hasn’t had that luxury. He has played every minute of Monaghan’s spring so far. An injury to Kieran Hughes midway through the campaign has left him isolated up front some of the time and surrounded by younger players the rest of it. Darren Hughes has put in regular stints at full forward but often finds himself coming deep to contest kick-outs, leaving McManus fighting a lone battle.

Of the new blood coming through, much was expected of Shane Carey after a fine Ulster campaign with Scotstown and an even better Sigerson campaign with DCU. But in spite of – or possibly because of – such a stellar winter, his form has been patchy in the spring. Daniel McKenna has flashed in and out at corner forward and Thomas Kerr has looked the part on occasion. But none of them have been able to take the heat off McManus.

Thing is, it might not even be of huge concern to them against Donegal in what will no doubt be an Ulster Championship redux affair. Monaghan actually have a better spread of scorers across the league so far – 16 as against Donegal’s 12 – so it will conceivably come down to who kicks better, McManus on his own or a combination of Murphy and Patrick McBrearty.

McManus hasn’t let Monaghan down yet. But at least the Donegal pair know that of one of them has an off-day, there’s someone else to pick up the slack.