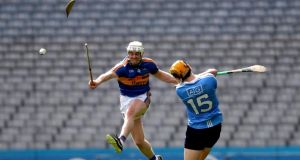 The hurley of Tipperary’s Michael Cahill breaks while blocking a shot from Paul Winters during the Allianz Hurling League Division 1A quarter-final at Croke Park. Photograph: Bryan Keane/Inpho

Not quite nothing to see here but not an awful lot of consequence, either. A blustery opening period aside, this quarter-final was predictably smooth sailing for Tipperary. Once they got their legs under them, they were much too slick and much too clever for a game, but realistically limited Dublin team. For all that Dublin have a decent spread of solid hurlers, they don’t have a John McGrath and they don’t have a Pádraic Maher.

What they do have, and can have, is a willingness to make life unpleasant for others. When they tear into the opposition, as they did here for a rampant spell early on, they have an ability to speed things up to a brutalising intensity. Pat Gilroy has been preaching it with frank simplicity since the start of the year – Dublin are a threat when they work hard and they aren’t when they don’t.

That was the case here, at any rate. There was no in-between state, no point at which they were able to tread water. When Gilroy’s team were on top in the opening 10 minutes, they were comprehensively on top. But they were outscored over the closing hour by an eye-watering 2-23 to 0-10. A game they led by eight points 10 minutes into the first half was well beyond their grasp 10 minutes into the second.

“We won great ball coming out of defence but then gave it up cheaply. We weren’t doing that at the start. We made a lot of very silly mistakes after those first 10-15 minutes. Our stats guys reckon that 12 of their scores came from straight mistakes by us. At this level you can’t do that. It requires more work on the training field, mainly ball work. That’s what we need to do.”

Dublin rocketed out of the blocks, attacking each ball with extreme prejudice and living in Tipp’s every thought. Danny Sutcliffe was aflame, Ryan O’Dwyer was the picture of disruption, Paul Winters was picking off points from unlikely angles. With 12 minutes on the clock, Dublin were a scarcely believable 0-10 to 0-2 ahead.

Tipp looked like the game had started without them, as if nobody had told them about the hour going forward. Paudie Maher was dummied by Sutcliffe for an early point and bought it like a drunk at lights-flashing time. Fiontán McGibb got his first of the day with a shake of the hips that fooled a pair of Tipp defenders before slinging over a gorgeous point from the sideline. Dublin were finishing their work with a flourish but the Tipp laxity played its part too.

“I am looking forward to seeing it again,” said Mick Ryan afterwards. “I have to temper our start with how well Dublin started, and on balance, credit should go to them rather than us being flat. They got some start and if they had got another point or two at that time, they might have tipped us over the edge. But they were full value for the lead at that time and they really came at us. It was a desperate-looking scoreline.”

Once Tipp snapped to attention, however, they didn’t have to go eyeballs-out to put some manners on the scoreboard. It made for a manic opening to the game – after 18 minutes, the teams had taken 24 shots and hit 19 points, leaving Dublin 0-11 to 0-8 ahead. When McGrath planted Tipp’s goal soon after, skittling a low one past Alan Nolan after a collecting a breaking ball with a lovely pirouette, it put them into a 1-11 to 0-12 lead.

Dublin trailed from there to the end. Sutcliffe faded out of the game and was lucky enough to stay on the field after escaping with his nose clean from a couple of off-the-ball skirmishes. Ronan Maher walked on a second yellow just before half-time, leaving Tipp to play the rest of the game a man down. They went in four points up, though, which eased their burden.

The second half was a stroll in any case. John O’Dwyer made his first appearance of the year and eventually found his range, sticking two-long range points after a couple of misses. Pádraic Maher was his usual rampaging self, while Jason Forde carried on his brilliant spring form, both from play and from dead balls. The game was over long before the end.

Tipp move on to face Limerick in Thurles next weekend. For Dublin, it’s seven weeks to Kilkenny in Parnell Park. They have much to ponder.